You are at:Home»Current in Carmel»Carmel Community»Carmel interfaith leader remembered for courage

Athar, a Muslim leader and Carmel resident, died Aug. 4 at age 73 after a long battle with cancer. 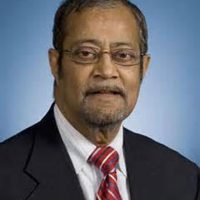 Athar was an endocrinologist at St. Vincent Health and associate professor at Indiana University School of Medicine. He was presented the Carmel Interfaith Alliance Ambassador of the Year honor for his 40-plus years of interfaith work in November 2017. In 2015, he received a Golden Hoosier Award for his volunteer work. Athar, born in India, moved to the United States in 1969 after graduating from college in Pakistan. He and his wife, Shaista, had four children.

Zehr said when now U.S. Rep Susan Brooks was a U.S. attorney after the Sept. 11 attacks in 2011, he reached out to her several times.

“He reached out to tell her the people who did this on 9/11 weren’t just killing other people, Muslims were killed, also,” Zehr said. “He wanted her to understand this type of killing is not in the Quran. He was committed to building relationships. He saw great value of people of other faith traditions that weren’t Muslim.”

Dennis Sasso, who has been rabbi of Congregation Beth-El Zedeck since 1977, was a member of Carmel Interfaith Alliance along with Zehr and Athar. All three were involved with the now-defunct Indianapolis Interfaith Alliance, which was formed in the late 1980s. Athar was then a part of the Center for Interfaith Cooperation.

“He and I got engaged in Jewish/Muslim dialogue before the 9/11 (terrorist attacks),” Sasso said. “We would speak at the hospital, to the nursing staff and to the administrators so they could better understand the needs of patients of Jewish and Muslim background.”

Sasso said they learned from one another. He said Athar wrote books, including on the subject of medicine and Islam.

“We would talk about ethics in the medical profession as far as Judaism and Islam,” Sasso said. “He was always ready to go and talk and clarify (about his faith). There’s no question he is the dean of Muslim interfaith alliance here. What struck me about Dr. Athar is humility, his openness and acceptance. He was not only eager to teach but eager to learn. He was a very modest person of great achievement. The memories of his influence remain with us.”