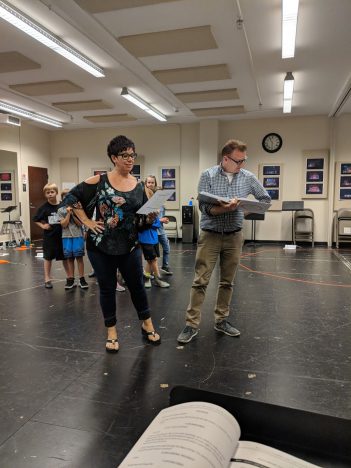 Holly Stults Haas has a number of reasons for wanting kids to see Booth Tarkington Civic Theatre’s musical production of “James and the Giant Peach.”

Absorbing a positive message is one reason. Inspiration to work in theater is another.

“The fact that the kids in the audience will be seeing kids like themselves performing on stage is so important,” said Stults Haas, executive programs director for Civic Theatre. “It may inspire a child in the audience to take a class or audition for a play or musical, or merely help them relate more to the story because kids are up there.”

Jr. Civic’s Mainstage Musical production of “James and the Giant Peach” has no shortage of kids in the cast: 33, to be exact, including more than a dozen from Hamilton County. The young performers range in age from 7 to 14 and share the stage with only two adults, including Stults Haas, who plays Aunt Sponge — one of two villainous aunts who torment the protagonist, James Henry Trotter, an 8-year-old orphan who, after discovering a magic potion, is whisked away on harrowing adventures inside a giant peach.

Brent Marty, Civic’s director of Music & Education, is the other adult cast member. He plays the ruthless Aunt Spiker.

“Spiker and Sponge are awful villains, which is so fun to portray,” Marty said. “(They are) the characters you love to hate.”

Based on the 1961 novel by Ronald Dahl, Jr. Civic’s production runs June 15 through June 20 in The Tarkington, 3 Center Green, Carmel.

“There are so many life lessons hidden in this peach of a story,” Stults Haas said. “(There is) hope, finding the magic and wonder in what seems to be grim circumstances (and) tolerance, realizing that it is OK to be different and embracing that in everyone.”

For Stults Haas, the best part about being in the show is the opportunity to perform alongside Jr. Civic students.

“Theater is an art form where someone’s age does not matter,” she said. “A 10-year old can be more talented and better prepared than a 40-year-old. We are their directors and teachers outside of this rehearsal process, but in rehearsal we are all castmates. They learn a lot from us, but in turn, we learn a lot from them. We are all working toward the same goal and are focused but have fun getting there.”

Tickets are $17.50 for adults and $12.50 for kids 18 and under. For dates and times and to purchase tickets, visit civictheatre.org.