You are at:Home»Current in Carmel»Carmel Community»Carmel family advocates for legislative change in Washington, D.C. 2 years after son loses battle with cancer

It’s been more than two years since Carmel 6-year-old Brooks Blackmore died after a battle with brain cancer. His parents, Josh and Tracey Blackmore, said the pain is still very real, but they feel the love and support of friends and family as they try to make a positive difference in Brooks’ name. 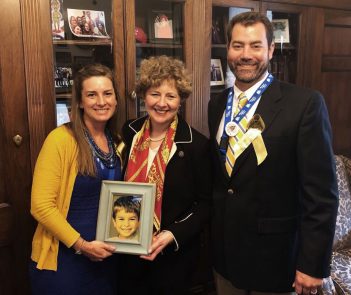 The Blackmores visited Washington, D.C. in April to talk with congressional leaders and advocate for a bill called the Childhood Cancer Survivorship Treatment Access and Research (STAR) Act, which would strengthen children’s cancer research efforts, enhance the quality of life for survivors and help kids get access to life-saving treatments. The Blackmores were there as ambassadors for St. Baldrick’s Foundation, the largest private funder of childhood cancer research, and participated in the eighth annual Childhood Cancer Action Days, April 23-24, coordinated by the Alliance for Childhood Cancer.

The bill was passed in the U.S. House May 22. U.S. Rep. Susan Brooks of Carmel was a co-sponsor.

“There are children in every corner of our country who are battling or losing their fight with this ruthless disease,” Brooks said in a statement. “The STAR Act will help advance research efforts to discover new therapies and treatments to save lives and combat pediatric cancer. The STAR Act also works to improve the overall quality of life for pediatric cancer survivors by improving systems for monitoring and providing treatment.”

On May 19, the family also helped raise nearly $40,000 for St. Baldrick’s at an event called Be Brave and Shave, which was held at Grand Park.

“This could not be possible without all of you taking the time to shave your head, volunteer or donate,” Tracey Blackmore said in a message to attendees. “You should be so proud of how you are making a difference in the childhood cancer world.”