You are at:Home»Current in Carmel»Carmel Community»Artist designs helmets for IndyCar drivers in workshop behind Carmel home 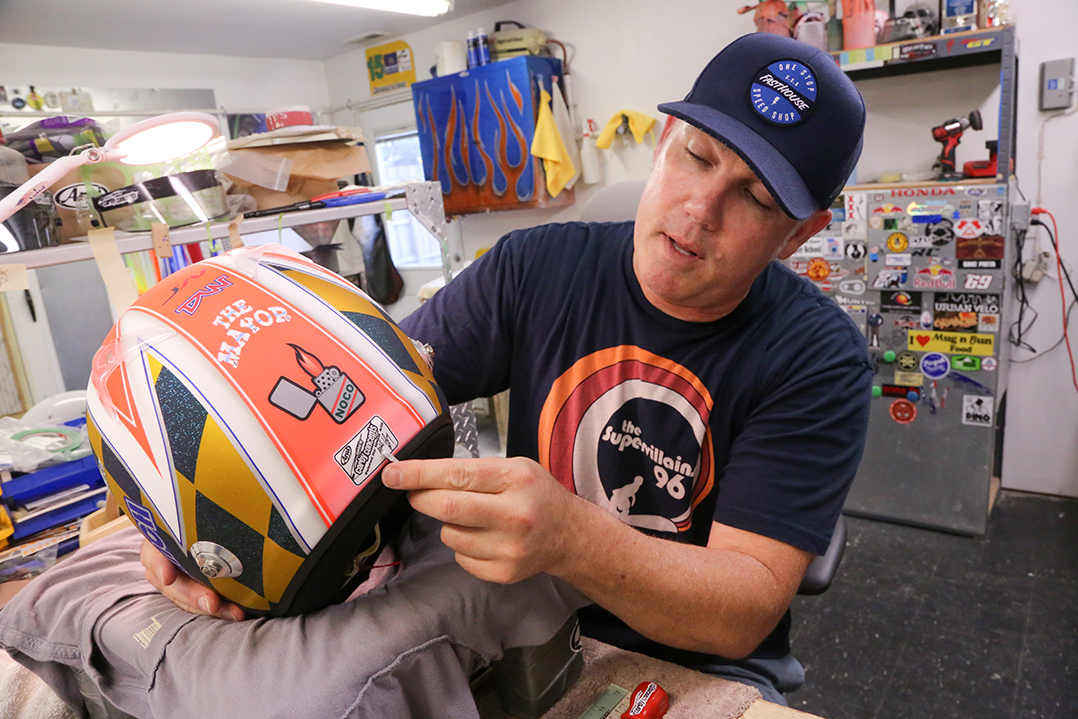 Michael Corby works on a helmet for IndyCar driver James Hinchcliffe in the workshop behind his Carmel home. (Photo by Ann Marie Shambaugh)

Hidden behind a house in west Carmel is where helmets are designed for IndyCar drivers such as Charlie Kimball, J.R. Hildebrand, Stefan Wilson and James Hinchcliffe, among others.

It’s not a big factory or studio space. It’s a small work area connected to the house of Michael Corby, who works by himself, taping helmets by hand and spray painting vivid colors that will be seen by millions of people during the Indianapolis 500.

Corby, 49, said he feels like he’s part of race day because of the work he does for his company, Corby Concepts.

“The helmet is their identification, so it’s a big deal,” he said.

Corby’s has created more than 1,000 custom helmets since he got into the business more than 20 years ago. He spends 15 to 40 hours on a single helmet, depending on the design and how many colors are used. He creates the design on his iPad using Procreate, but for the most part he freehands the work when he’s taping up the helmet to be spray painted.

To paint the helmets, hes sands them down and tapes off one layer with everything covered up but the areas where a certain color will be applied. He has special shaped tapes to create curves. He also uses stencils. He said he loves the work but that it can be slow and delicate, so it’s not for impatient people.

“Like I tell people, my job is watching paint dry,” he said.

Corby’s work costs on average of $1,200 to $2,000, which doesn’t include the helmet itself. During racing season, he said there aren’t enough hours in the day to complete all the requests. Often, a collector pays for the helmet, and then that person gets to keep it after the race. Some helmets are autographed and donated to charities or sponsors. A helmet will last about two to four races, although some intense races — such as the Indianapolis 500 — really beat up helmets because of the speed and debris. Corby said a helmet looks sandlblasted after those types of races.

Most of the helmets include the national flag of the driver’s native country and, of course, sponsor logos. He said helmets for amateur drivers can be fun to design because they often have really creative designs.

Corby got into the field in 1989 when he began racing go-karts and his father owned an auto body shop. His dad suggested he paint his helmet to stand out, and other drivers noticed and started placing orders.

“Somebody said, ‘That’s really cool. Who did that?’” he said. “I told them I did, and they told me I should do it for a living.”

Corby continued designing and painting helmets, mostly as a hobby, but as demand increased, he decided to go full-time in 2000.

“I can’t believe it’s been 18 years of doing it full-time,” he said. “I got tired of staying up until 2 or 3 in the morning in my basement in Broad Ripple doing helmets. I thought, ‘Maybe I should just do this full-time.’”

Corby moved to Carmel in 2005. When he gave up his shop in Gasoline Alley, he decided to work closer to home and was pleased to find a house with a separate work area as part of the property. Now, he can work whenever he chooses and be close to his twin sons. And while he paints, he’s got his two dogs wandering through the shop.