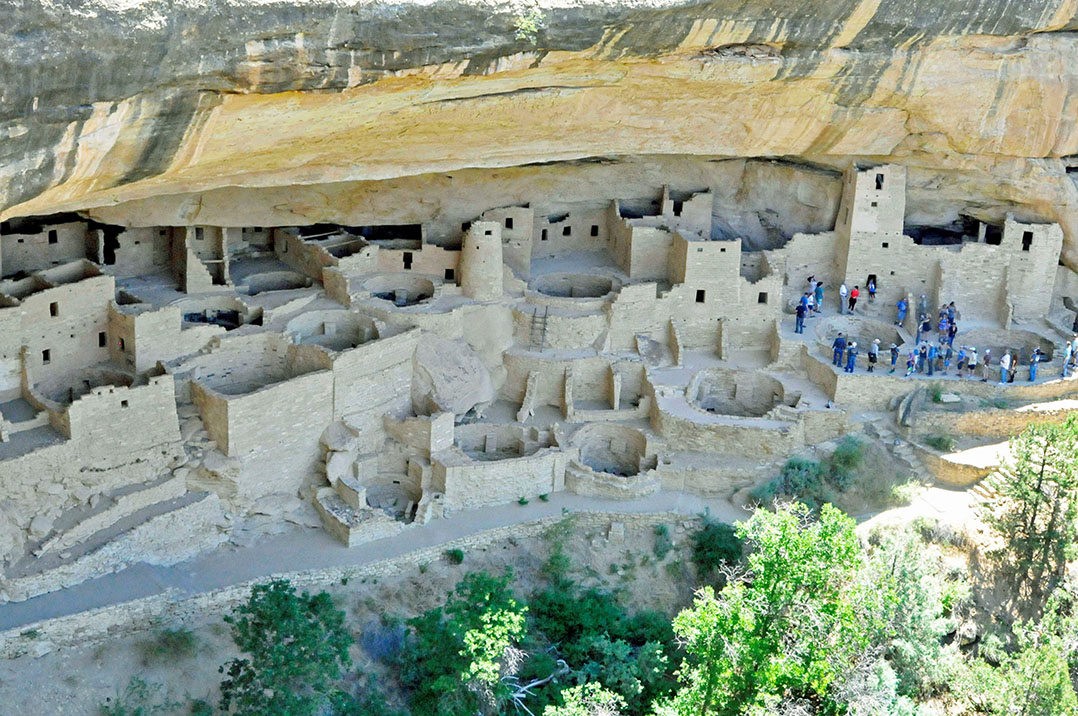 Mesa Verde National Park, in the southwest corner of Colorado, includes remarkably well-preserved dwellings of people living in what is now North America hundreds of years before Columbus.

More than 10,000 years ago, Native Americans began living in what is now the Four Corners region of the United States. Originally hunter-gatherers, they eventually established villages and cultivated corn. In about 600 A.D., a group now called the Ancestral Puebloans, perhaps to escape their enemies, began building villages atop a 7,000-foot-high plateau Spanish explorers named Mesa Verde (Green Table). They located their villages on ledges below overhanging rocks. By the 13th century, these cliff dwellers were constructing long-lasting structures made of sandstone blocks held together by mortar, with roofs made of wood. They erected stone towers as lookouts for unwelcome visitors.

Over time, about 600 cliff dwellings were built atop Mesa Verde. A collection of structures known today as Cliff Palace is the largest cliff dwelling in North America, built in about 1200 A.D. to house 100 people. It includes 23 kivas, circular rooms that were used in religious ceremonies. Cliff Palace also includes a 26-foot tall square lookout tower and a shorter round tower, the exact purpose of which remains unknown. In about 1285, the cliff dwellers of Mesa Verde and the inhabitants of the surrounding area abandoned their villages and moved south, probably to avoid a severe drought in the area, leaving behind many of their household items.

In 1888, two Colorado ranchers looking for stray cattle atop Mesa Verde discovered the abandoned ruins of Cliff Palace, which they described as a “magnificent city.” In 1906, after visitors had walked away with many of the artifacts of the area, Mesa Verde became a national park. Visitors today can hike with knowledgeable park rangers to many of the cliff dwellings, including the Cliff Palace,