You are at:Home»Current in Carmel»Carmel Community»Carmel High School’s Wolff named Teacher of the Year

Just being nominated for the Teacher of the Year award would have been enough for Sarah Wolff. 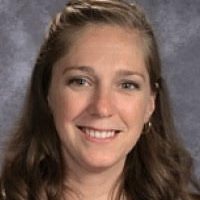 The Carmel High School art teacher learned at a banquet celebration April 26 she had been named as the 2018 Stephen A. Backer Teacher of the Year for Carmel Clay Schools from a field of 25 nominees.

“I’m almost speechless,” Wolff said. “I’m really humbled and incredibly honored to represent the school system in this way. I wasn’t expecting it. I do a lot of extracurricular activities for the school system. I really feel the nomination was a thank you for my extra effort.”

Wolff, a Westfield resident, is the sponsor for the school’s House of Representatives, so she oversees several of its fundraising projects, with the largest being the Dance Marathon for Riley Hospital for Children.

She has been a coach for the Coquette and Charisma Dance Teams since she started at the high school.

Earlier this year, Wolff issued her ceramic art class with a random acts of kindness challenge. The result was more than 5,100 inspirational messages posted on every high school student’s locker.

“It has been a joy to see how Sarah’s passion for teaching and selfless leadership has made a lasting impact in the lives of students and staff at Carmel High School,” Dr. Amy Dudley, CCS co-interim superintendent, stated in a press release. “She is an incredible educator that challenges students to not only excel academically, but motivates them to be kind, caring and compassionate leaders both in and out of the classroom. She is admired by so many students and staff and it is a privilege to be able to recognize her for this achievement.”

One teacher from every elementary school, two from each middle school and eight from the high school comprised the nominations.

A 1999 Ball State graduate, Wolff has been an art teacher at CHS since August 2000. She previously spent one year at an inner-city middle school in Columbus, Ohio.

Nominations can come from parents, students and other staff members.

In the past, there was no banquet. The award was a surprise announcement in the winner’s classroom. Wolff said this year all the nominees were announced publicly.

“To even be compared with some of those teachers and the amazing things they are doing with the classroom and the kids, that alone was an honor enough, that I was even the same caliber of teacher with them,” Wolff said. “I know what they’ve accomplished and I respect the things they have done. That was the greatest compliment to be in the same list of educators.”