You are at:Home»Current in Carmel»Carmel Community»Carmel’s Holocaust ceremony recalls when democracy failed 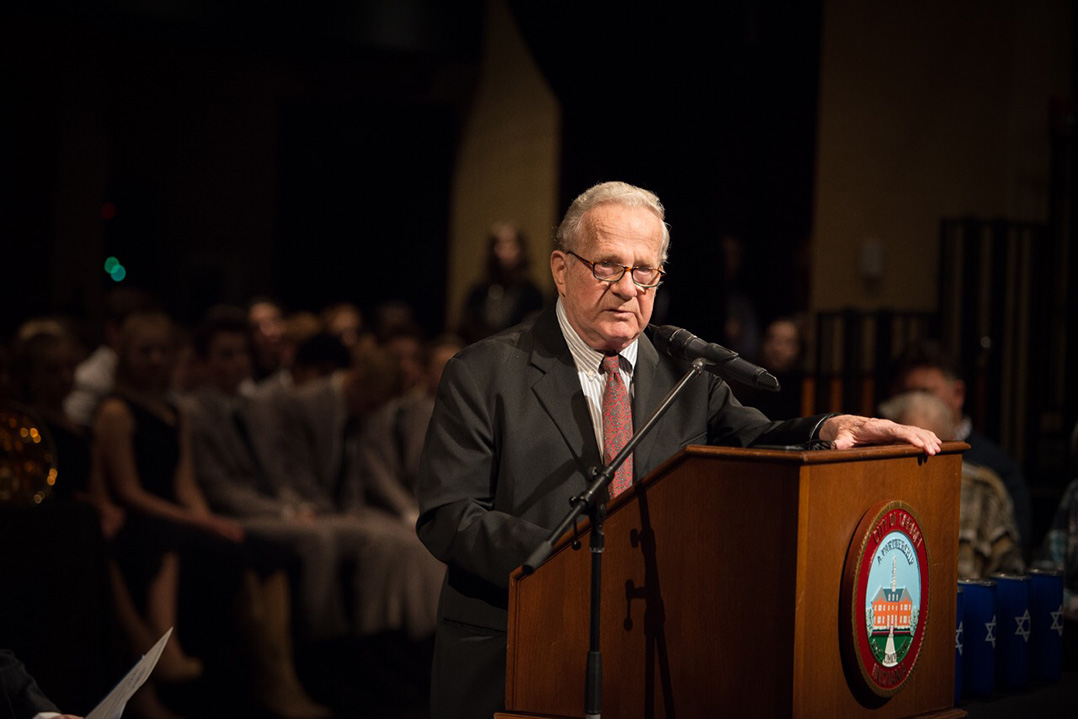 A recent poll showed 22 percent of American millennials haven’t heard of the Holocaust. Two-thirds of those millennials could not identify the significance of Auschwitz, the deadly concentration camp in Nazi-occupied Poland.

Carmel Mayor Jim Brainard used the Holocaust Remembrance Day ceremony to urge caution on not letting history repeat itself. The event was April 13 at The Studio Theater at the Center for the Performing  Center in Carmel.

“Six million Jews were killed by the Nazis,” Brainard said. “Men, women and children were sent to death merely for being different. Let’s not just remember how they died but how they lived. Mothers, fathers, sons and daughters, sisters and brothers who loved and hoped and dreamed just like us.”

Brainard said it’s important to talk about the Holocaust, as difficult as it is.

“So we never forget,” Brainard said. “You may have heard the phrase that history gives us cause for hope rather than despair.”

Brainard said it wasn’t that long ago that democracy failed in civilized, modern Europe, reminding the audience Adolph Hitler was elected chancellor of Germany.

“It’s important to remember so we can protect our own society from that same fate,” Brainard said. “After several years of saying never again, there are indicators we are seeing a resurgence of anti-semitism as well as other groups of people who hate people unlike themselves.”

Brainard said it important to remember it was everyday people who did evil and who very easily fell into doing evil in Nazi Germany.

Brainard used the ceremony to pay tribute to attendee Janina Korzeniewski Clark, a 96-year-old Carmel resident whose Catholic family orchestrated the freedom of many Polish Jewish citizens by smuggling them out of the Warsaw Ghetto and into her parents’ home.  They hid in her family’s cellar until other Resistance members could take them out of Warsaw to safety.

“This amazing woman was horrified of what was happening to the Jewish people of Warsaw, many of whom were friends,” Brainard said. “She risked her life every time she participated.”

Brainard said Clark has signed contracts for a screenplay and book about her life.

The main guest speaker was Indianapolis resident Frank Grunwald, who survived concentration camps as a youngster. His mother and brother died in the gas chamber at Auschwitz, but another prisoner pulled Grunwald out of the line, saving him. The Indianapolis resident didn’t start talking about his experiences until a decade ago. Grunwald worked for 30 years at General Electric and now teaches industrial design at Purdue University.

“The memories of the Holocaust are with me every day and almost every hour,” Grunwald said. “What makes the Holocaust difficult to comprehend is the vast number of deaths.”

Grunwald said anti-semitism was prevalent in Europe before the war.

“The German propaganda machine was able to pour gasoline on an already existing fire,” he said. “Throughout history there has been a conflict between two powerful forces, anger and hatred as opposed to tolerance and empathy. These characteristics seem to accompany societies no matter where they are and how educated and culturally sophisticated they might be.

“Unfortunately, anger and hatred seems to be part of the human DNA. They will mostly likely continue to fester as long as man occupies this planet.”

Grunwald said his only hope is that history doesn’t repeat itself.