You are at:Home»Current in Westfield»Westfield Community»Fundraisers to be held for ‘Be Brave Brooks’ anniversary

It’s been nearly two years since Joshua and Tracey Blackmore lost their 6-year-old son Brooks to brain cancer. His story inspired more than 10,000 people to like the Facebook page, “Be Brave Brooks,” a fundraising campaign for cancer research and to honor the legacy of the Carmel boy.

As time goes by, it’s still tough for the Blackmores, but they’ve found a way to heal. 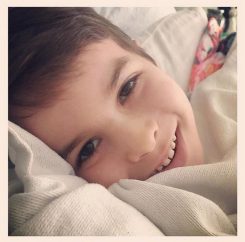 “Some days it feels so raw and so new still, and other days I settle into my grief a little bit,” Tracey said. “In the past two years, I’ve been blown away by the love that people have. I’m still getting stories about people who are so inspired by Brooks.”

Since his death, several fundraisers have been held in his name, including a special shoe made by the footwear company Bucketfeet. The firm sold a shoe designed with one of Brooks’ paintings printed on each pair. The limited run was a huge success, raising $17,000, Tracey said.

Other people have raised money in Brooks’ name, whether by running a marathon or through birthday donations. Several clothing companies held events where a percentage of all sales went to St. Baldrick’s Foundation in honor of the Blackmore family.

On May 19, a major fundraiser in Brooks’ name, the St. Baldrick’s Be Brave and Shave event, will launch. Participants will shave their head to support the cause and help find a cure for childhood cancer. The event will be held at The Grand Park Events Center in Westfield from 10 a.m. to 2 p.m. For more, visit stbaldricks.org/events/mypage/13295/2018.

On May 21, Donatello’s Italian Restaurant in Carmel will host a Dine for Brooks Day, where 10 percent of all sales will go to St. Baldrick’s Foundation. In addition, there will be a silent auction where attendees can bid on items such as tickets and collectibles. May 21 marks the two-year anniversary of Brooks’ death.

To donate to the silent auction or make a reservation for that night, call 317-564-4790 or email donatellositalian@gmail.com.

The St. Baldrick’s Foundation is a volunteer- and donor-powered charity that supports research for cures for childhood cancers.