Gavin Cooley is a singer-songwriter and accomplished musician whose debut album will be released in the fall.

He’s also a concert promoter and visionary whose mission is to provide a stage for young musicians to showcase their talent. 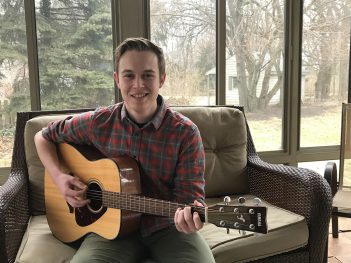 Cooley is delighted to be part of that effort.

“I want to reboot the local music scene in Noblesville and, to an extent, in Hamilton County,” Cooley said. “I believe I have an opportunity to create something special that can bring together the community.”

Eger and Kosla are seniors. They have performed together since August 2017. Kosla plays guitar and saxophone. Eger plays piano.

“They are absolutely wonderful musicians,” Cooley said. “I cannot wait to see their performance.”

Cooley approached LSS with the idea for the “Fourth Friday” series after being rebuffed by area venues when he inquired about performing for customers. LSS board members not only embraced Cooley’s idea, they put him in charge of it.

In his leadership role, Cooley, among other responsibilities, books musicians and promotes the shows.

“He is in charge of the entire series. We have that much faith and confidence in him,” said Alys Caviness-Gober, director and secretary for LSS. “What is special and unique about this series is that it is, as far as I know, the only singer-songwriter series in the area devoted to showcasing the songwriting talents of high school-age singer-songwriters. It gives them an opportunity to perform in an intimate setting with a rapt, attentive audience.”

A gifted singer-songwriter in his own right, Cooley plays guitar and piano. He plans to release an album of what he calls “alternative folk” music later this year. In the meantime, he’s investing his time and energy into growing the “Young Musicians Showcase,” an idea born of his own frustration seeking a creative outlet.

“I wanted a place to perform,” Cooley said. “I contacted a few restaurants in the area to see if they were interested, but I didn’t get any replies, so I decided to host my own concert.”