A new event at the Westfield Washington Public Library will delve into the musical details of a galaxy far, far away. Aaron Krerowicz, music scholar, will present on “Star Wars” film scores at 6 p.m. Jan. 24 at WWPL, 333 W. Hoover St.

“The Music of Star Wars: A Celebration of John Williams’ Film Scores” will highlight how the musical themes told a story in the popular space opera. The event is free and open to the public. 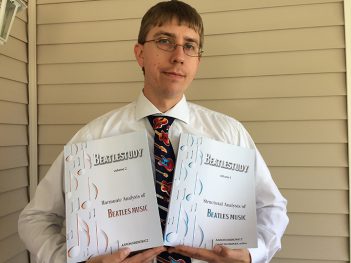 Aaron Krerowicz, a music scholar from Carmel, will present on the “Star Wars” soundtrack at the Westfield Washington Public Library Jan. 24. Both volumes of BEATLESTUDY will be available for purchase. (Submitted photo)

“The fundamental premise is the music of ‘Star Wars’ tells the story of ‘Star Wars,’” the Carmel resident said. “Different characters have different themes, so when characters interact visually on screen, their themes interact in the soundtrack. By using themes, the music is able to tell the story.”

Krerowicz will play audio examples and clips from seven of the eight films. The eighth has not yet been released.

“The nicest compliment I’ve gotten when I do this program is, ‘I will never watch ‘Star Wars’ the same way again,’” he said. “Most people don’t pay too much attention to the music. Everybody knows the opening scroll and end credits, but the musical artistry that goes into these soundtracks is exquisite. The goal for people in attendance is to find new things to appreciate about films and music they’re already familiar with. They can see how music tells a story and go back and re-watch these films and have a newer and deeper appreciation for films and music by understanding how these themes work and how this music helps tell the story.”

Krerowicz usually presents on the Beatles, which he travels the nation to do. Last year, he presented on the Beatles at the WWPL. Krerowicz said typically 30 people attend the events, but 40 to 50 attended the WWPL Beatles program, so he’s expecting a large audience for the upcoming ‘Star Wars’ presentation.

“I earn my living traveling around the country doing these presentations, but with the new film there’s a lot of interest in ‘Star Wars,’” he said. “My main focus is the Beatles. That’s where I’m doing most of my work. ‘Star Wars’ is just a glorified hobby, just for fun. I really like it, and I love the music.”

Krerowicz said he also enjoys analyzing “Star Wars” scores because the music is orchestral instead of rock.

Krerowicz writes a blog on “Star Wars” where he analyzes the entire “Star Wars: The Last Jedi” soundtrack. He also writes a free monthly newsletter. He will have both volumes of BEATLESTUDY, encyclopedias on the structural and harmonic analysis of the Beatles, available for purchase. For more, visit flipsidebeatles.com.