You are at:Home»Current in Carmel»Carmel Education»Carmel Clay Schools superintendent resigns

The Carmel Clay Schools board of trustees accepted the resignation of its superintendent Jan. 12.

Supt. Nicholas Wahl had been on paid administrative leave since Oct. 10 when the school board announced it was going to conduct a review of district leadership. 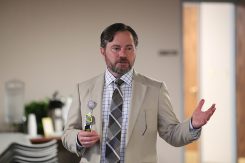 “The Board has concluded that a change in leadership is in the best interest of the school corporation,” reads a statement released by the school board Jan. 12. “The Board believes that Dr. Wahl’s approach and leadership style are not consistent with the Board’s vision. The Board and Dr. Wahl have mutually agreed to sever their relationship.”

Wahl will receive his contract salary and partial benefits through June 30, 2018. He will not receive the deferred portion of the incentive compensation that was awarded for prior contract years or for the 2017-18 school year. His contract was set to run through June 30, 2022. According to Wahl’s contract, signed in August 2013, his annual salary is $195,000 with potential increases each year.

The board will immediately begin the search for a new superintendent and hopes to have one in place by July 1, 2018.

Associate Supt. for Business Affairs Roger McMichael and Assistant Supt. of Curriculum, Instruction & Assessment Amy Dudley have been serving as interim superintendents since Wahl was placed on administrative leave. CCS spokeswoman Courtney Taylor said they will continue serving in those roles until a new superintendent is hired.

CCS Director of Human Resources Corinne Middleton was also placed on paid leave Oct. 10. Taylor said she did not know if Middleton’s future with the district had been determined.

CCS officials released little information on the leaves since announcing them, although they confirmed the situation did not involve students or criminal activity.

Some have speculated that Wahl and Middleton are involved in a romantic relationship, as both filed for divorce earlier this year. A district spokesperson confirmed in October 2017 that the review included examining the relationship between the two and that many components are under review.

School board President Layla Spanenberg did not respond to a request for comment as of press time.