You are at:Home»Current in Zionsville»Zionsville Cover Stories»The path ahead: New trails, improved roads among projects slated for 2018 in Zionsville 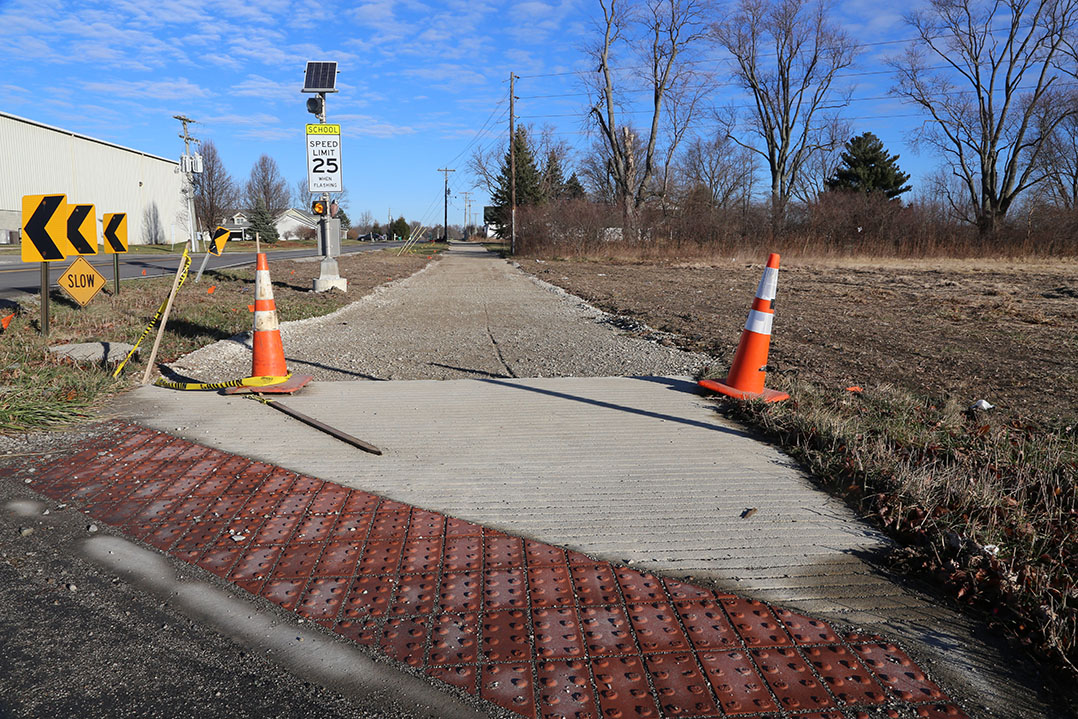 The 700 E pathway connecting the Royal Run neighborhood to Zionsville West Middle School is one of many projects planned for completion in 2018 in Zionsville. (Photo by Ann Marie Shambaugh)

Many infrastructure improvements are in the pipeline for 2018 in Zionsville, with an expansion of Zionsville Road the largest planned for the year. Other upgrades include new emergency warning sirens, drainage pipelines and a public plaza at Town Hall.

The biggest street upgrade planned for 2018 is the widening of Zionsville Road, which will go from two to three lanes when a center turn lane is added between Technology Center Drive and 106th Street. The project also includes adding a bike path on the west side of the road.

Work is expected to begin in the spring and last through the construction season. Zionsville Mayor Tim Haak said the road will likely be closed to through-traffic during construction, which is expected to save two months of work and $450,000.

“We’ll probably get a better project doing that,” Haak said. 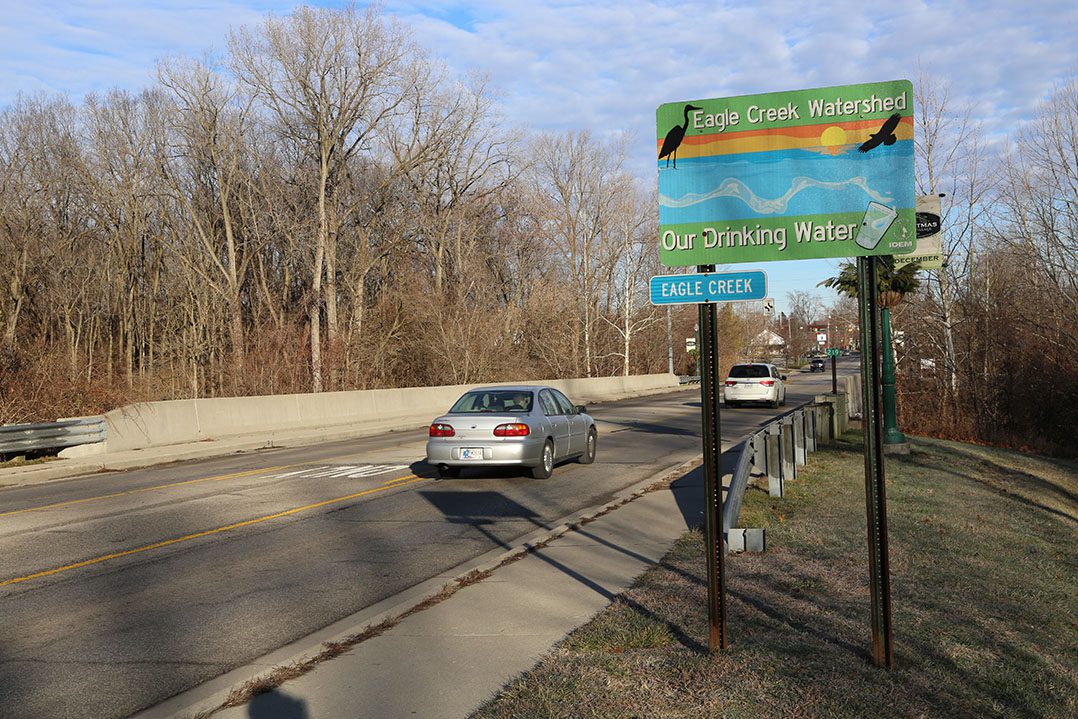 A pedestrian bridge or reconfiguration of the existing bridge on S. Main Street is planned for 2018. (Photo by Ann Marie Shambaugh)

Other street projects include:

Drainage improvements are planned for 4th Street between Hawthorne and Pine streets, with construction beginning in early 2018 and ending by mid-summer.

Construction also is expected on 3rd Street between Oak and Walnut streets to increase stormwater pipe capacity to reduce flooding in the area.

The town also is working on drainage upgrades in the Irongate subdivision to reduce flooding.

Last year marked the first year for Boone County agencies to receive funding from a 1 percent public safety Local Income Tax approved in late 2016, and it’s having the desired effect in Zionsville.

“It was huge. It kind of saved our public safety departments. They were both essentially operating on a negative budget, and we were having to use funds from other departments to fund them,” Zionsville Mayor Tim Haak said. “Notably, our streets department and parks department were both having to divert funds from their budgets to police and fire. We don’t necessarily have to do that anymore.”

In 2018, ZFD is planning to add a new fire engine, and the town will add five emergency warning sirens throughout town. 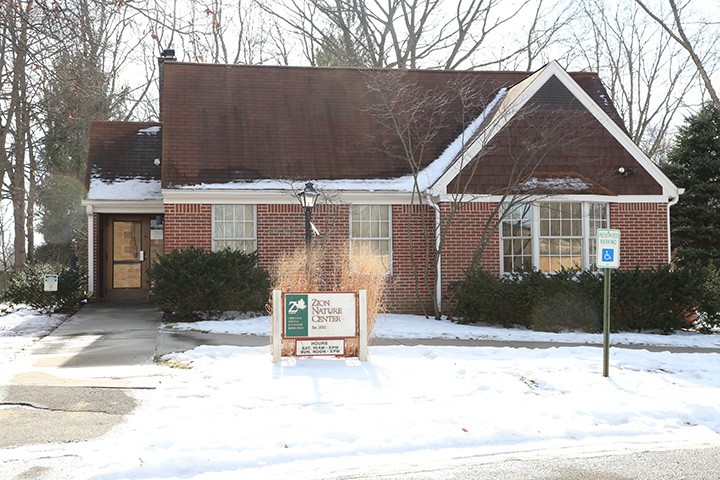 The parks department is in the midst of a five-year master plan update, with a final public meeting to gather feedback scheduled for 6 p.m. March 21 at Town Hall, 1100 W. Oak St.

The builders of the Vonterra subdivision off of Zionsville Road are incrementally donating land for a 43-acre park near Eagle Creek. The master plan for the park is complete, and it is expected to open in the next year or two as funding for the project becomes available.

For a couple of years the town has been looking at relocating the Zion Nature Center, which is housed in a building owned by Zionsville Community Schools that the district might need in the future as its student population grows. Bids for a proposal to build it near Heritage Trail Park came in too high, so the town “shelved” the project, Haak said.

But in 2017, the town acquired the 13-acre site of the former Rail Trail Gardens on S 857 E, which is now planned to be the site of the nature center and offices for the parks and street departments. Construction isn’t expected to begin in 2018, but the town will work on the design of the site. Haak said it could include one building or – more likely – a building for the street department and another one to house the nature center and parks administration. 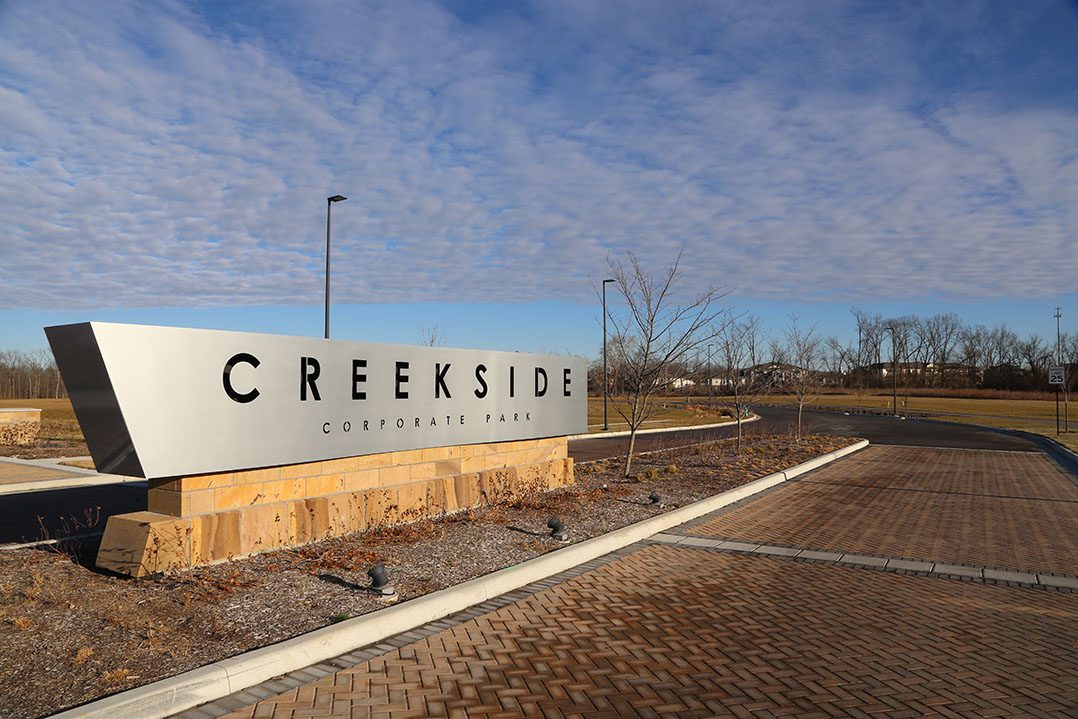 The town sold Creekside Corporate Park to Rockland Development for $6.1 million in 2017, and some new tenant announcements are expected in early 2018.

The town also is expecting to finalize the sale of two parcels that comprise the site of the former Town Hall building. The owners of Storen Financial Group and Zionsville Eyecare have proposed a 20,000-square-foot, two-story building on the west parcel to house its offices, and the town expects to put the other parcel up for sale after a new road between the sites is complete.

Kroger is expected to open this month in Boone Village, replacing the Marsh that went out of business in mid-2017. Plans for two other Kroger-owned stores at 116th Street and US 421 and E 300 S and US 421 are on hold.

The town will begin a study in 2018 to determine ways to ease traffic in the downtown area. Implementation of the plan is not expected for two or three years.

“It’s going to be a pretty big challenge to accommodate both pedestrians and vehicles. If we were solely concerned about vehicles, it’s a lot easier to do, but we want to make sure it’s done right,” Haak said. “We don’t want to split Main Street in two. We still want to make it walkable for everyone.”

The biggest project of 2017 was the construction of Zionsville’s new Town Hall building, which opened in October. Some finishing details will be put in place in 2018, with a new plaza between the building and the Rail Trail set to open in the spring.

Zionsville’s Walking Man sculpture was installed in late 2017 near Town Hall, and in 2018 art students are expected to personalize it for the town.

The sidewalk poetry contest, which made its debut in 2017, is expected to return in 2018.

Zionsville has been selected as the site of the new central region headquarters for Little League International, which will include three new fields and a 1,500-seat championship field. Fundraising for the project is expected to happen in 2018, with an opening date projected for sometime this year.