You are at:Home»Current in Zionsville»Zionsville Education»Zionsville schools, teams honored for achievements 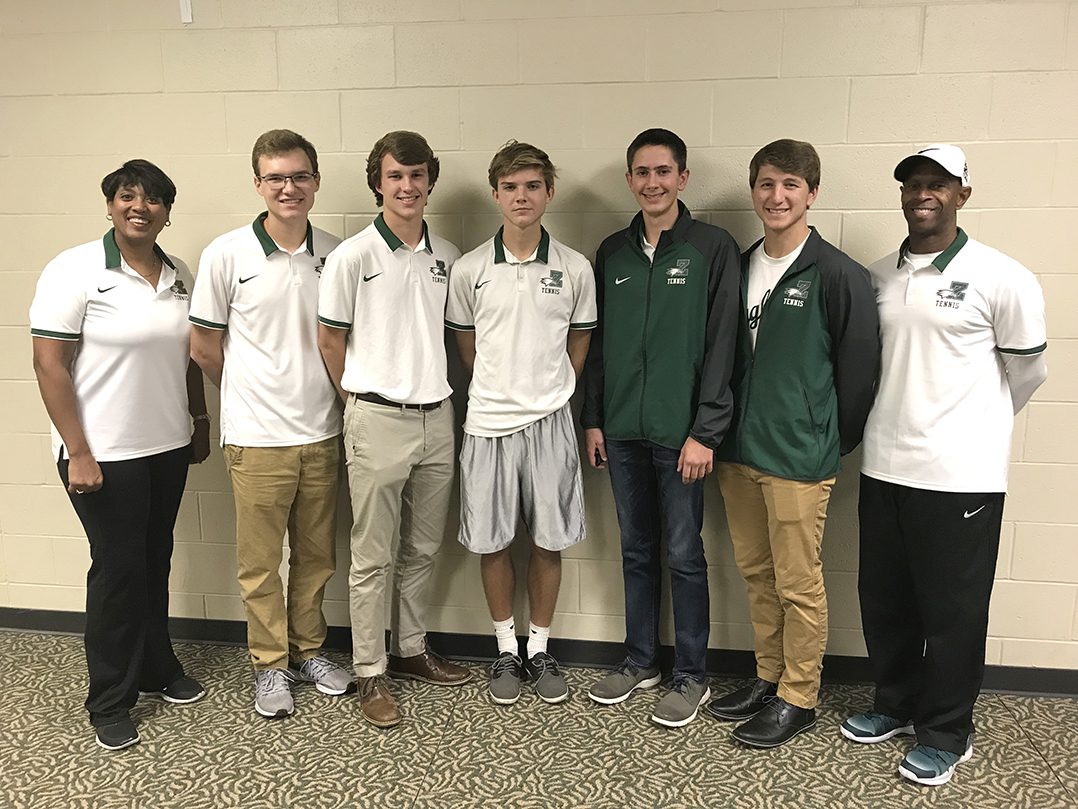 Five varsity seniors on the ZCHS boys tennis team earned Academic All-State recognition for the 2017 season. Interim head coach Earl Allen said this is the first time since 2001 that a high school program has had five seniors recognized. The  group has a combined GPA of 4.35. Each student scored more than 1,300 on the SAT and 30 or higher on the ACT. Allen said the seniors raised more than $20,000 for the American Cancer Society and Peyton Manning Children’s Hospital during their four years in the program. 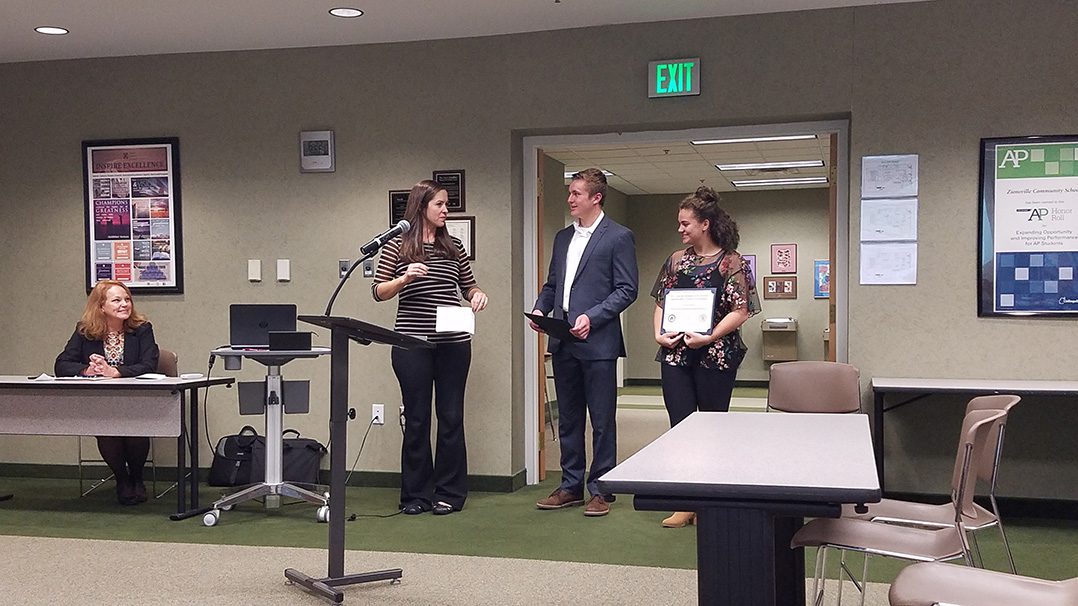 Lindsay Alesandrini, teacher and chair of the World Languages Dept., presented Cameron Harmon and Juliana Morell with the Outstanding High School Students of Spanish award at the Nov. 13 Zionsville school board meeting. (Photo by Desiree Williams)

Zionsville Community High School is home to Cameron Harmon and Juliana Morell, two of the six students honored with the Outstanding High School Students of Spanish award provided by the Indiana chapter of the American Association of Teachers of Spanish and Portuguese. The award is given to students who excelled academically in their first three years of Spanish education in high school and who participate in activities related to Spanish in the U.S. and abroad. 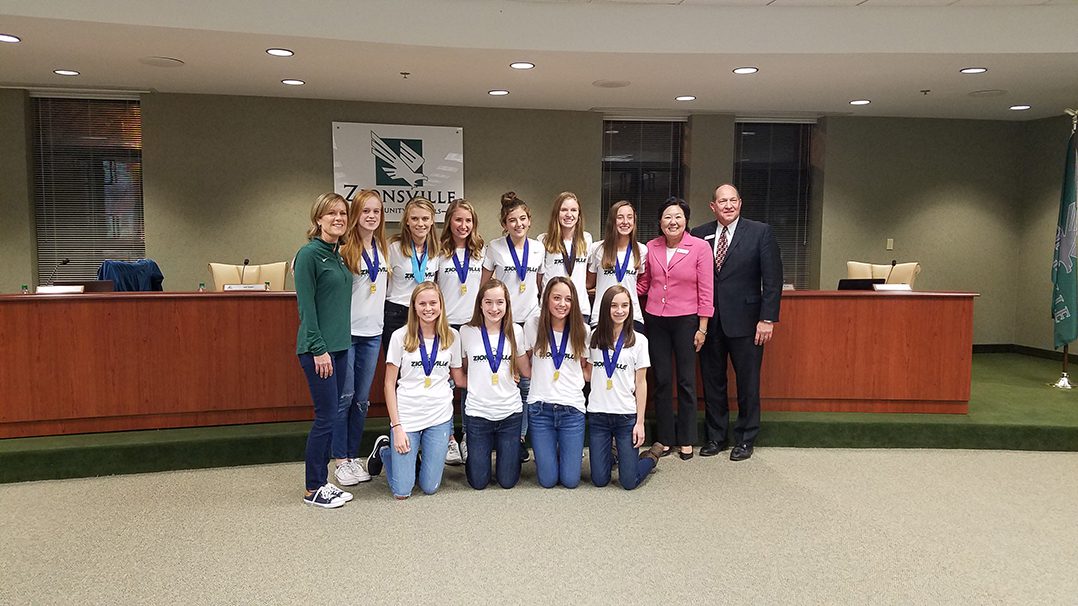 The Zionsville Community High School girls cross country team won the 2017 IHSAA Cross Country State Finals Oct. 28 in Terre Haute. This is the first cross country team title for ZCHS. Coach Suzanne Rigg said Zionsville is only the ninth school to win the title in the 37-year history of the state finals. “Every girl ran her best race on that day in Terre Haute,” Rigg said. “It was perfectly executed.” 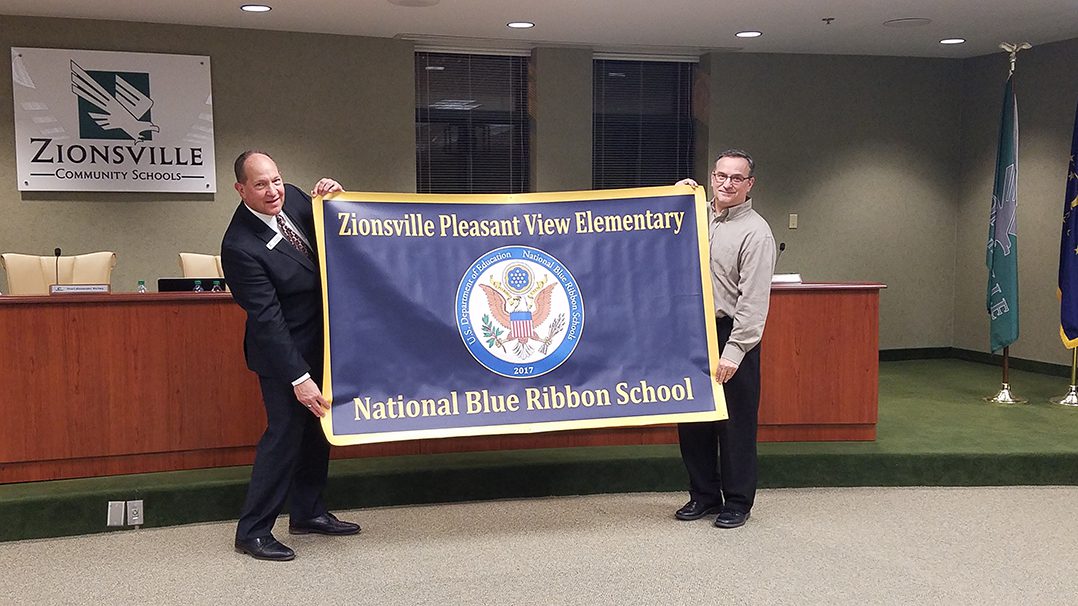 During the November Zionsville school board meeting, Supt. Scott Robison and board Vice President Joe Stein accepted the National Blue Ribbon School banner on behalf of Pleasant View Elementary. PVE was named a 2017 National Blue Ribbon School by the U.S. Dept. of Education for incorporating high learning standards and placing in the top 15 percent of the nation in ISTEP scores.