You are at:Home»Night & Day»Carmel resident has ‘hairy’ assignment in Civic’s ‘Joseph’

Carmel resident Jen Martin has one main challenge in her two roles in Civic Theatre’s “Joseph and the Amazing Technicolor Dreamcoat.” 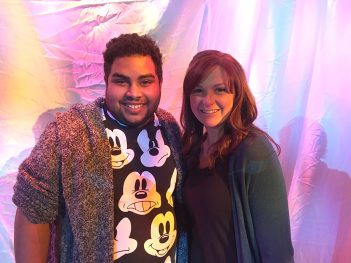 Martin plays one of Jacob’s wives and also assumes a male role of one of the Ishmaelites.

Martin is joined in the production by Carmel resident Matthew

Altman, who also previously appeared in Civic’s productions of ‘Joseph’ in 2012-13 and 2013-14 seasons. Both times, like this year, the productions were held in the holiday season.nThe show is set to run from Dec. 15 to Jan. 7 at The Tarkington at the Center for the Performing Arts in Carmel.

“I like the athleticism of it and the symmetry,” said Altman, a 2007 Westfield High School graduate. “The energy is full-throttle all the time. It’s great. I love the music. It’s an Andrew Lloyd Webber score. We’re a family here and we get to do it on Christmas and New Year’s, too. It’s going to be fun.”

Altman plays one of Joseph’s brothers and the butler.

Martin said it’s fun to go to rehearsals with a small group of people.

“They are dedicated to making it clean and specific about the choreography and blocking,” Martin said. “It’s such a fun story. It’s a story I grew up hearing in Sunday school and church. We have a country and western number. It’s not often you get to do those every show. And there is a 7 1/2-minute number at the end of the show.”

That’s where the athleticism really kicks in, Altman said.

“We get to sing and dance after doing the whole show,” Altman said.

Some elements include keeping the house lights up, adjusting overwhelming sound effects, adjusting house rules for talking and moving, additional seating options for those with mobility devices and an American Sign Language interpreter upon request.

In 2014, the Civic Theatre offered the first inclusive performance in the state with “The Cat in the Hat.”