You are at:Home»Current in Westfield»Westfield Community»Westfield resident plays in homeschool league Northwest Warriors

Doug Thornton is convinced there are many lessons to be learned through sports.

“Team work, how to persevere, how to work on a skill and that all translates,” Thornton said. “When you’re are homeschooled, there is nowhere to go when you get to high school.” 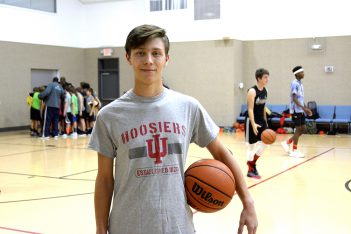 Thornton has eight children, four girls and four boys, ranging in age from 33 to 14. His final two are playing homeschooled basketball like the others.

The Carmel resident is the coach of the Northwest Warriors’ 14U team, which includes his son Dilan, 14. His son Drew, 17, is a junior on the varsity team.

The Northwest Warriors which play their home games in Traders Point Christian Academy in Whitestown,

“Since 1997, I’ve been coaching homeschool basketball,” Thornton said. “I started with this league about 2000.”

Thornton has coached his girls in a homeschooled program called the Trailblazers.

“I’ve been back and forth but my last three were boys,” Thornton said. “

Austin Perkins, a junior from Westfield, plays on the junior varsity team.

“It’s really good competition with a lot of fun mixed in so it’s not overwhelming,” Perkins said.

His mother, Melissa Perkins, said this is good outlet for players who are high school aged but homeschooled and still want to compete. Perkins has played in Westfield Youth Sports Inc. leagues when he was younger but they didn’t have basketball program for players after sixth grade.

“We chose the Warriors for the leadership development and the coaches and how they take these boys and turn them into young gentlemen on and off the court,” Melissa said