There is no question why Zionsville Police Dept. Officer Josh Chapman is dedicated to Special Olympics.

“I do it for the athletes. These athletes are incredible,” Chapman said. 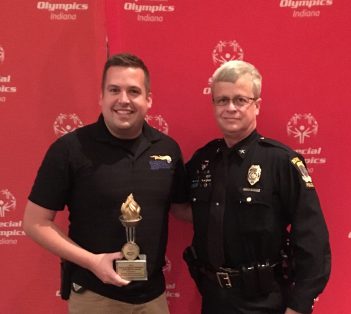 Chapman encouraged others to attend a unified event or attend the Eunice Kennedy Shriver Games at Brebeuf Jesuit Preparatory School in Indianapolis in September.

“You’d see the energy they put into everything, win or lose,” Chapman said. “They can place first or they can place last and they are just as amazing. They put everything out there. It really is inspiring. I’m not the most athletic person, but watching them makes me want to be better.”

“It’s amazing to even be able to be nominated, but to win caught me off-guard,” said Chapman, who has been involved with Special Olympics for more than three years.

Chapman serves as event chairman for Strikes for Special Olympics Indiana, a bowling fundraiser. It was held Nov. 18 at Woodland Bowl and raised $17,000.

Chapman said more than $50,000 was raised the previous three years.

He also serves as chairman of the Boone County Law Enforcement Torch Run, held in July. The run goes from Traders Point Church in Whitestown to Lions Club Park in Zionsville.

“I also go to speak at recruiting academies with law enforcement to talk with new officers about getting involved in the Law Enforcement Torch Run,” he said.

Chapman is a unified dance partner with Special Olympics athlete Maddie Best of Zionsville. He also has been involved with the Eunice Kennedy Shriver Games.

Chapman was a member of the recruiting and planning committee for the Law Enforcement Torch Run Unified Run Across America in 2015.

In addition, Chapman was a participant in the 2017 Polar Plunge, another Special Olympics fundraiser, and helped coordinate a Zionsville Community High School team. In the past, he had worked event security.

“This year I’ll meet with high schools around the area and try to engage them more with the Polar Plunge,” Chapman said.

“I think my high school students might get me to plunge again,” he said. “It was really cold. If they raise enough money, they might be able to convince me to go in.”