Kate Huffman has been working on a comedic view of her life for two years. 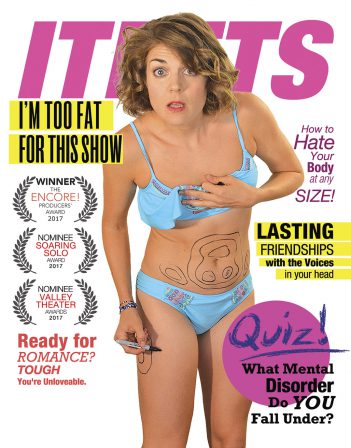 Kate Huffman will bring “I’m Too Fat For This Show” to Indianapolis. (Submitted image)

Finally, the actress made a deal with herself: If she could finish the show by her April birthday in 2016, she would reward herself with a trip to Ireland.

That worked, and “I’m Too Fat for This Show” was completed. Huffman, who grew up in Indianapolis and graduated from Cathedral High School in 2001, is bringing her one-woman show Dec. 8 to 10 to IndyFringe, 719 E. St. Clair St. Huffman’s sister, Molly, and her husband, Christopher Czerniak, live in Carmel with her two boys.

“It’s based on 20 years of eating disorders, OCD and body dysmorphia, chronic pain,” said Huffman, who has lived in Los Angeles for 13 years. “I started writing in 2014. How do I make sense of my life and make any meaning out of it? I was at one of those low points. I didn’t really want to but thought I had to tell my story. I do a lot of comedy out there, so I had to make it funny.”

Huffman said there is a stigma around eating disorders.

Huffman said writing about it was more therapeutic than she expected.

“I hated writing it,” Huffman said. “I would cry at my computer. It did lead to more self-acceptance, mostly because when I did share it with people, they respond hugely. I had friends over to read it aloud. They said they could relate to it. Whatever your issues are, you can relate to it. It’s neuroses and obsessions.”

Huffman’s show won the Encore Producers’ Award in Hollywood Fringe Festival in Los Angeles, so she decided to take it on the road, already having a show in Chicago.

Huffman has appeared in shows like “Fresh Off the Boat” and “Castle.” She had a couple of scenes in “$h*! My Dad Says,” where she appears with William Shatner and Jean Smart.

She regularly does sketch comedy and improv.

“It’s a sketch comedy and storytelling thing,” Huffman said of her show. “My eating disorder is personified by a character who lives on the screen the whole time. We have conversations the whole time. That’s where we get our story arc, and we meet lots of people along the way.”

“It’s come full circle from the reward,” she said.