Lucas DeBard decided to fully embrace his love for romantic songs after a newspaper article. 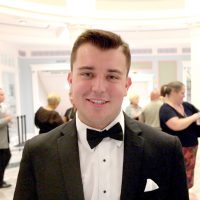 “(The headline) asked the question, was I the most romantic teen in Indiana,” DeBard said. “In college, it’s become kind of a joke at my expense sometimes, but I just thought it was funny. It was after I won the Songbook and out of the interviews that was definitely the most interesting. I kind of realized a lot of what I sing is romantic music, so a lot of what I do is romantic music.”

DeBard will have four performances of “I’ll Take Romance” as the first production of the first Magic Thread Cabaret series, set for Nov. 24 and 25 with two performances each night at 7:30 p.m. and 10 p.m. at the IndyFringe Basile Theatre, 719 E. St. Clair St., Indianapolis.

Magic Thread Cabaret is a nonprofit venture produced by Tom Alvarez and Dustin Klein. It is fiscally sponsored by Fractured Atlas, the New York-based nonprofit technology company that provides business tools for artists.

DeBard, 21, said many of the songs in his upcoming show are Songbook standards, including “I’ll Take Romance.”

“I do a medley of ‘I’ll See You In My Dreams’ and ‘I Have Dreamed,’” said DeBard, a Lebanon High School graduate. “I’m also singing a song called ‘You’re Awful.’ Of all the music I listen to, the Songbook is my favorite. I go in and out with a lot of things. I listen to a lot of different types of music, but the thing I always gravitate back to is the music from the Songbook. As Michael Feinstein says, the Songbook is always evolving. Even songs from Billy Joel and the Beatles are slowly integrating their way into the Songbook.”

DeBard said the performances will include an Indiana medley, composed of a couple of Hoagy Carmichael tunes.

DeBard said it’s been difficult to prepare for performances while taking classes and appear in a chorus at an opera called “It’s A Wonderful Life” at IU.

“We’ve been preparing for that,” DeBard said. “It’s difficult for me and my band as well, because my band is all students from IU. It’s tough to get four people in one place at one time, but we’ve been getting at it and rehearsing every week.”