Christina Dant has already had her share of national TV show auditions for singing roles. Although she hasn’t been selected, each one provides a learning step. 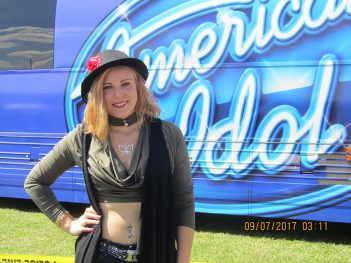 The Whitestown resident participated in two auditions with “American Idol,” one in Louisville Aug. 30 and another in Muscle Shoals, Ala., Sept. 7.

Dant, a singer-songwriter who performs as ChrisyD, previously auditioned with “America’s Got Talent” twice and “The Voice” and “The X-Factor.”

“They keep telling me my stages are going to grow up and I’ll be ready soon,” said Dant, a Broadcast Music Inc., artist. “It gives me practice. It’s a good opportunity to learn something from it. It’s definitely nervous times, but I definitely go in these (auditions) with pride. They’re telling me to come back, so I’m good enough to keep on trying.”

Each experience provides confidence, she said. Dant, 19, said she doesn’t have one favorite genre, singing rhythm and blues, pop, country and soft rock.

Dant, who is working at Amazon, is planning to go to college to major in sound engineering.

“I want to keep music in my life, no matter what,” Dant said. “I just want to stay connected to my music. Being the one to create music for someone else would be cool.”

She made a demo album with four original songs by her and two written by Duke Elliott Timbs.

Dant performed with Timbs’ Bluescreamers at the Relay for Life in Beech Grove in June.

“When I look back at my earlier (recorded songs), I see I don’t sound the same,” Dant said. “I’ve definitely grown up. I have a lot more of a deep, soulful, smoky voice. Christine Aguilera, Adele, Alicia Keys is what I do lately. Back then, I had a small, girly voice, but it’s matured quite well.”

Dant worked with one producer from the United Kingdom, providing her vocals to the ballad over the phone.

Dant’s parents, Don and Debbie Dant, help manage her career and marketing. Dant’s music can be found on reverberation.com/chrisyd and on youtube.