You are at:Home»Night & Day»Carmel ex-pastor shares love of Reformation stamps 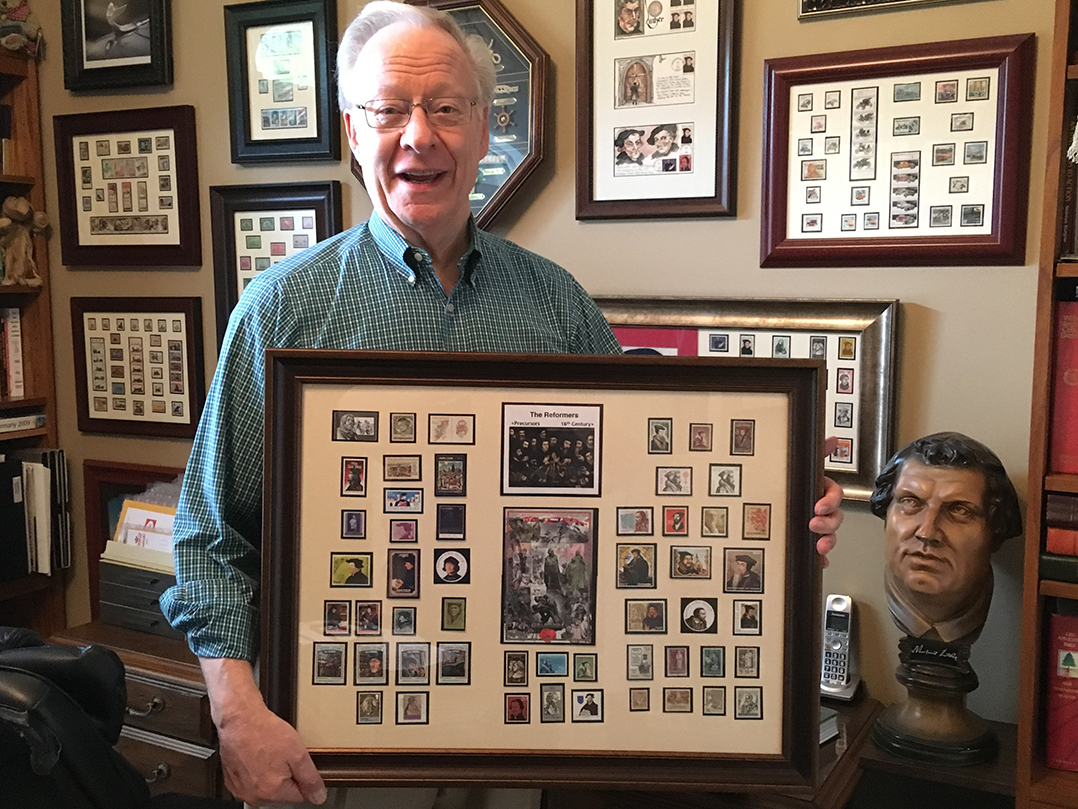 As this fall marks the 500th anniversary of the Reformation, Paul Swartz has been combining his passions for stamp collecting, the Lutheran faith and music.

The 74-year-old Carmel resident has been collecting U.S. stamps since he was 7 years old.

“I go back to the 1800s for U.S. stamps,” said Swartz, a former pastor of Carmel’s King of Glory Lutheran Church. “I view every stamp as a window to the world. It’s lifting up either a person, a building or a circumstance.”

Swartz, who serves as a volunteer usher at The Palladium along with his wife, Betty, had mentioned to Indiana Wind Symphony Director Charlie Conrad a couple of years ago the 500th anniversary of the Protestant Reformation and the great music around that time.

“I knew his love for putting together thematic concerts,” Swartz said.

They began planning together, and Swartz will give a historical narration for the symphony’s “Echoes Over Five Centuries: The Reformation” at 7 p.m. Nov. 12 at The Palladium in Carmel.

“I’ve always been a fan of church music and classical music,” Swartz said.

Conrad said Swartz brings a great deal of knowledge about the Reformation.

“In addition to the religious aspect, it had quite an effect on music as well,” Conrad said. “Paul will be doing the narration in between numbers. We’ll play some music that historically was significant, and some based on some of the chorales and tunes that came from the time. We’re doing a piece from Elisabeth Cruciger, the first female hymn writer of the Reformation, and she was also married to Martin Luther’s son. Martin Luther wrote several (hymns) himself. ‘A Mighty Fortress is Our God’ is the most famous one.”

Swartz, who will have a display of his Reformation and Luther stamps in The Palladium lobby, is writing a book called “A Life Stamped, Cancelled and Delivered!”

“I thought if I don’t get the book out until next year I can include all the stamps of Luther that are issued this year,” said Swartz, who has written several journal articles about Luther.

Swartz was pastor of King of Glory Lutheran Church for 13 years before retiring in 2012. He’s now serving at First Trinity, a diverse Lutheran congregation on the east side of Indianapolis.

“They can’t afford a pastor, so I’m helping them out,” Swartz said.

Swartz’s collection of Martin Luther stamps began in 1983 when the U.S. Postal Service issued a stamp commemorating the 500th anniversary of Martin Luther’s birth on Nov. 10, 1483. The stamp triggered a worldwide search by Swartz to discover what other Reformation stamps were produced. He has several albums full of stamps relating to Martin Luther or this year’s Reformation anniversary.

Luther published his 95 theses, or complaints against the Catholic Church, and launched the Protestant Reformation on Oct. 31, 1517. Many stamps from various nations are being reeled this year.

“Luther was the champion of individual rights and the freedom of the conscience,” Swartz said. “You won’t find anyone in the history of mankind who championed that more than Martin Luther.”

Choir voices are needed for the concert. For more information or to volunteer, contact pswartz@indy.rr.com

What: “Echoes Over Five Centuries: The Reformation”

Where: The Palladium, Carmel.