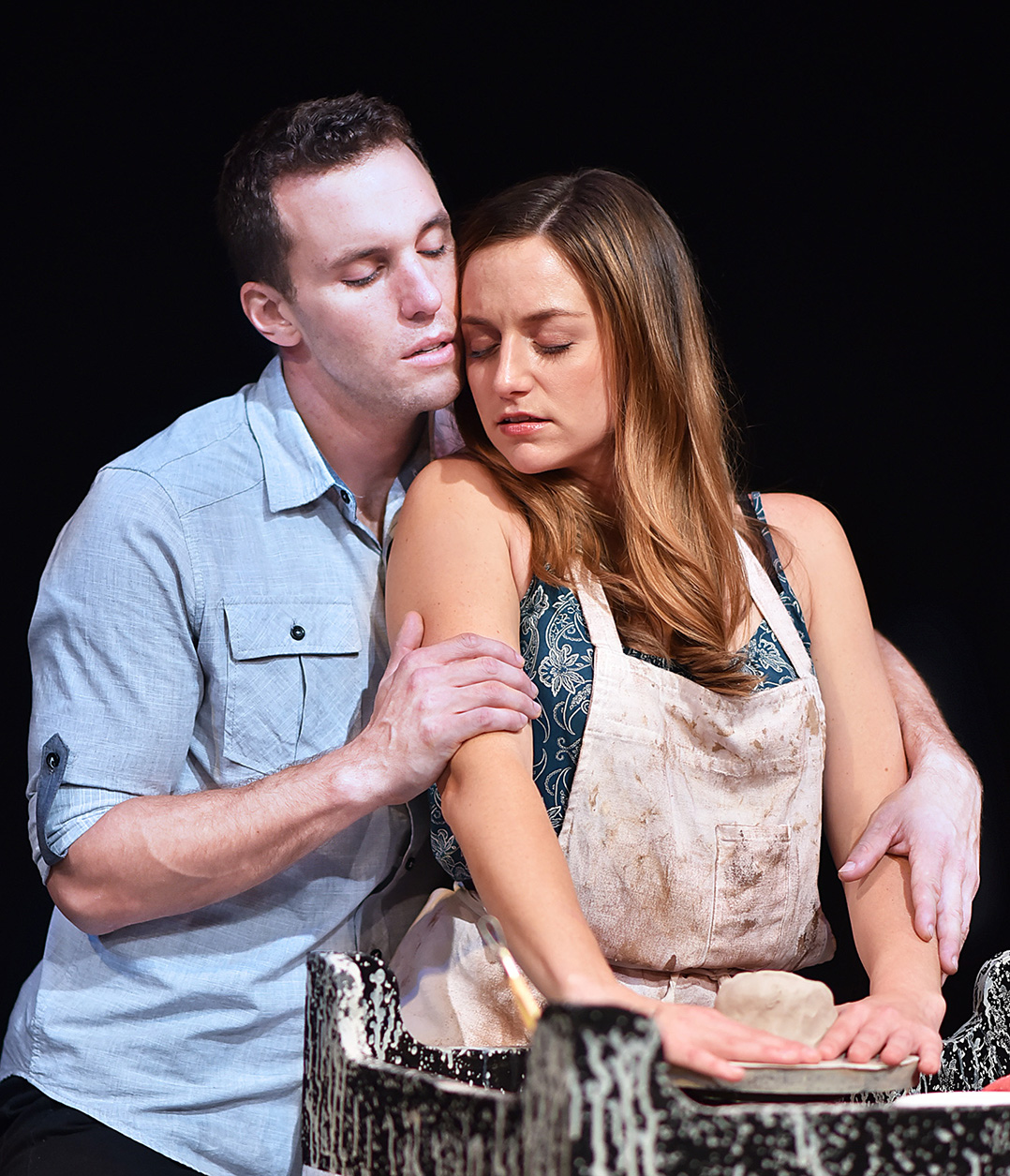 By Zach Dunkin
There it was. Right where I had filed it God knows how many years ago between REO Speedwagon’s “You Can Tune a Piano but You Can’t Tuna Fish” and Johnny Rivers “Realization.”  “The Righteous Brothers’ Greatest Hits.” So I dusted off the old turntable and set the stylus on the song I just had to hear again: “Unchained Melody.”
Beef & Boards’ “Ghost – The Musical” may not send you home humming any of its other 14 tunes but it’s three-time appearance in Bruce Joel Rubin’s stage adaption of his Oscar-winning film, “Ghost,” will surely set off the memory banks along the way.
The 1990 movie about a ghost of a murdered man who has to learn to communicate with the living world to try to save his girlfriend seems like a curious but fascinating choice for the musical treatment.
Not known for its memorable tunes, the strength of B & B’s first-time offering of “Ghost – The Musical” is in its stellar acting, mostly that of its two lead characters and a wild and crazy clairvoyant, under the head direction of Douglas E. Stark.
A sold-out crowd at a recent performance of the dinner theater’s long-playing musical – it runs through Nov. 18 — displayed its appreciation for Carmel High School graduate Andrea Laxton, who plays the leading lady Molly Jensen, Eddie Egan, the “ghost” Sam Wheat, and Renee Jackson, the hilarious Oda Mae Brown, the medium,  and the rest of the cast with its long and strong ovation. All three are newcomers to the B & B stage.
Some of that appreciation may have come from a few “hometown” fans who had come to see their own Laxton of Carmel. She returned to Indiana via her new residence in New York City, where the B & B staff “discovered” her and a handful of other talent to freshen up its staff of local favorites. Laxton actually has toured the U.S. and internationally with “Ghost.”
The show was notably faithful to the movie, with pretty much all of its memorable lines and scenes, including the steamy “pottery wheel” scene, which comes off a little less “phallic” than the movie version, reprising “Unchained Melody,” the couple’s “song.” One noticeable change was the subbing of “99 Bottles of Beer on the Wall” for the Herman’s Hermits hit “I’m Henry the Eighth, I Am” which Sam, the ghost, uses to badger Oda Mae into helping him.
Laxton is a captivating Molly, beaming in the romantic scenes with Sam and touching in the numbness of her grief.
Both Wheat and Laxton display a wide range of emotions throughout the night that hit on happiness, depression, anxiety, frustration, shock, romance and finally contentment.
There’s a key line after the opening song, “Here Right Now” where the young couple is moving into a new apartment and Sam does not want to throw away one of his favorite posters. Responding to Molly’s plea of “Sometimes ya gotta let go,” Sam replies “Letting go is not my thing.” It’s not long before Molly is the one who can’t let go as she mourns the loss of her Sam.
With an ensemble cast of 10 playing a multitude of parts, the slimmer version of “Ghost” is generally quite pleasurable but also exposes some of the challenges of adapting a fantasy movie to the stage. Lighting and sound effects create the visual and audio parts of Sam being a ghost.
Jackson is delightfully comical and rowdy as the charismatic huckster medium Oda Mae, delivering perhaps the show’s most entertaining number, the gospel-funk “Are You a Believer?”
The rest of the numbers – there are five in the first 20 minutes — are generally unremarkable, but played well by an orchestra of a half-dozen musicians under the direction of Terry Woods in their customary perch above the stage. While the songs may not carry much weight lyrically, both Wheat and Laxton are skilled vocalists.
Whether the movie should have been transformed into a musical is debatable, but what isn’t is the thrill of seeing how they pull it off in a piece that is not done very often. And besides, it was good to hear that Righteous Brothers classic once again.