You are at:Home»Current in Carmel»Carmel Community»Ramp planned to allow drivers to head south on Keystone Parkway from 146th St. 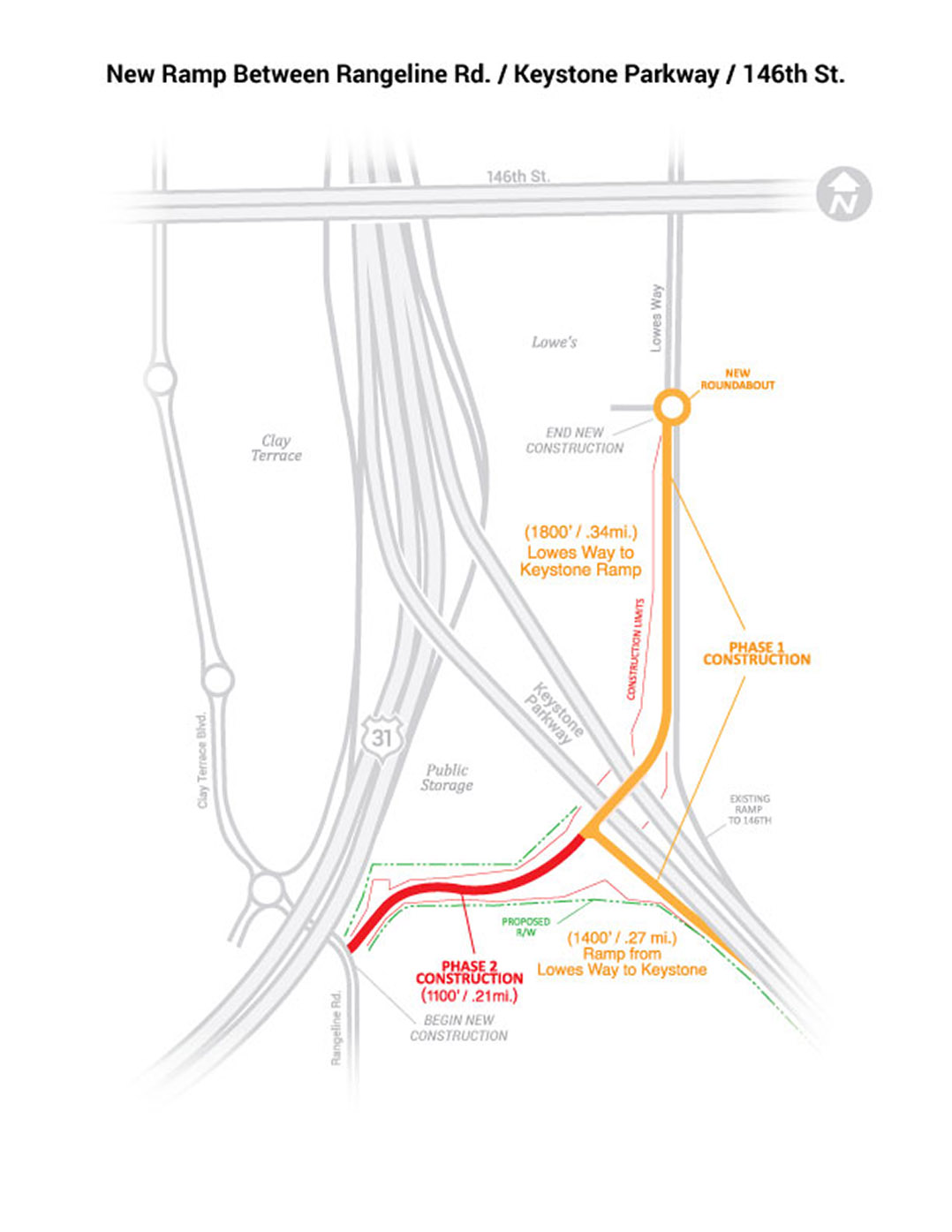 A two-phase ramp is planned to allow drivers to travel from 146th Street south on Keystone Parkway. (Submitted photo)

Those who have long desired access from 146th Street to southbound Keystone Parkway are a step closer to getting their wish.

City of Carmel Engineer Jeremy Kashman said his department is working closely with the Hamilton County Highway Dept. on a ramp project to extend Lowes Way south from 146th Street over Keystone Parkway and connect to a new ramp to southbound Keystone Parkway.

Construction on Phase 1 is projected to start April 2018 and be complete in October 2019. The estimated cost is $12 million

“As part of a second phase, the new Lowes Way extension will go further south and east to Range Line Road,” Kashman said. “We see this as a positive step to provide more access to Keystone Parkway, particularly for traffic heading to Carmel High School. This new ramp should alleviate some of the congestion we currently see at the roundabout interchange at 136th Street and Keystone Parkway.”

“The city is currently upgrading Range Line Road from 8th Street north to the U.S. 31 overpass, making it much better for bicycle and pedestrian traffic,” Kashman said.  “The reconstructed Range Line Road will provide new multi-use paths that will connect with Clay Terrace Blvd and will also continue along Lowe’s Way to 146th Street.”

Phase 1 design and construction costs will be funded using TIF (tax Increment financing) district revenues, along with funds from the Congestion Mitigation and Air Quality Improvement (CMAQ) Program, according to City of Carmel spokesman Dan McFeely. This would be from the TIF district at Clay Terrace, from which proceeds go to Hamilton County.

The city and the county jointly applied for Phase 2 Federal CMAQ construction funds.  The funding plan for Phase 2 is to utilize the TIF to fund the remaining portion and then split whatever is remaining.  The city included $1.6 million in a 2016 bond to help with the construction of Phase 2. As part of the Range Line Road project, the city is constructing the roundabout that will eventually connect with Phase 2.

INDOT media relations director Nathan Riggs said if the ramp had been placed in the right of way between Clay Terrace and Lowes, it would likely required building a long fly-over bridge.

“Bridges are expensive to build and expensive to maintain so there is that cost,” Riggs said. “I think the cost estimates were prohibitive for building the motion.”

Riggs said Lowe’s Way is not in INDOT’s right of way, so building a bridge there would have incurred additional cost. He said those costs combined with how much traffic would use that option led to it being determined too cost prohibitive at the time.