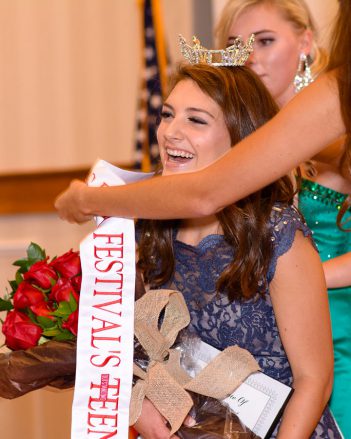 As Miss Fall Festival, her first official event will be Pumpkins & Hayrides Oct. 22 at Lions Park, where she will judge a costume contest.

“I’m just excited and looking forward to working with the Lions,” she said. “I really appreciate all the roles they play in making Lions Park a beautiful park for all of Zionsville and their service in general. It was really exciting winning, and I’m excited to see what this year holds.”

Nieshalla said she hadn’t thought about entering pageants until her piano teacher, Tamara Totty, and a former Miss Fall Festival mentioned it to her.

“I pursued it, and it ended up being a great opportunity,” Nieshalla said.

“I chose (substance abuse) because it is a prevalent issue not only in Boone County, but also nationwide,” Nieshalla said. “I think it’s important that we realize that it is right in our backyards and in our schools.”

For her talent, Nieshalla played the piano and performed an original song called “RAIN” that told her story of losing a friend to substance abuse. She has been practicing piano since first grade and later began incorporating voice lessons. Nieshalla hopes to record her song and make it available to share with the public.

Nieshalla’s next step is to compete for the Miss Indiana Outstanding Teen title in June of 2018 at the Zionsville Performing Arts Center.