Since the 1970s, the music of John Williams has been closely associated with many, if not most, of Hollywood’s most iconic films

“Jaws,” “Star Wars,” “Close Encounters of the Third Kind,” “E.T.,” “Raiders of the Lost Ark,” “Saving Private Ryan” and the “Harry Potter” series are but a handful of blockbusters scored by the industry’s undisputed musical king. 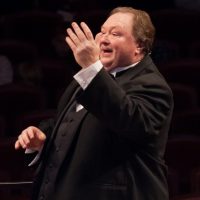 “John Williams is probably the most well-known film composer of all time,” said Charlie Conrad, musical director and chief conductor for the Indiana Wind Symphony. “Quite a few of his really famous film scores, we’ll be doing selections from them.”

It all begins Oct. 7, when the Indiana Wind Symphony opens its 20th season with “The Wondrous World of John Williams,” a tribute to the world-renowned film composer. The IWS performs at the Palladium in Carmel’s Center for the Performing Arts, its home since 2011.

A sampling of the season-opening pieces are “Harry Potter’s Wondrous World,” “Midway March,”  “Superman,” “Adventures on Earth from E.T.,” and “Music from Star Wars.”

But that’s not all.

“Another big feature is the second-ever performance of a brand new flute concerto by Frank Ticheli,” Conrad said. “We’ll feature our principle flutist, Carl Butler, as soloist. This is really an amazing piece. It’s called, ‘Silver Lining,’ a concerto for flute and wind ensemble. It’s one that’s probably going to take its place high on the list of pieces for solo flute with big concert band with winds.”

•”Trumpet Magic with Allen Vizzutti,” May 25.

All performances are at The Palladium.

“We love playing there and love playing for the audience of Carmel,” Conrad said. “I think we’ve got a really strong lineup, starting out with John Williams and the new flute concerto.”