Carmel High School ended the 2017 homecoming festivities with the homecoming dance as always, but this year was different for Jenni Hadden. Her 15-year-old son was able to enjoy the dance, which is something she never thought would happen. 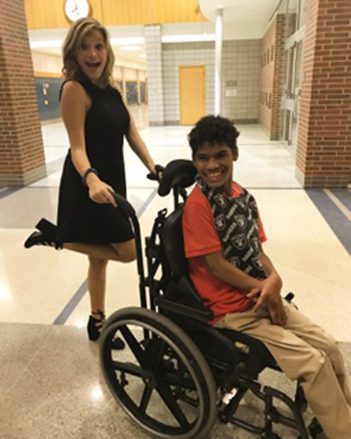 Hadden’s son, Charlie, is a freshman who was diagnosed with schizencephaly and cerebral palsy as an infant. Schizencephaly is a rare brain disorder that can cause a delay in physical and cognitive development as well as seizures and more. Charlie was adopted at birth and diagnosed at 9 months old.

While in elementary school, Charlie became involved in Best Buddies and has participated every year. Best Buddies pairs students with disabilities with a student who provides mentorship, friendship and opportunities to get involved in school activities. This year, Charlie was paired with Halle Throgmorton.

“I just have never met a kid like her,” Hadden said. “She’s been through some trials of her own medically, and because of that, I think it’s helped her to see the need for helping people that can’t help themselves. She’s just a firecracker.”

During spirit day at school, Throgmorton dressed up as Minnie Mouse and went to Charlie’s classroom to ask him to be her “Mickey” so she could take him to the dance. Halle invited him to her house for photos and dinner before the dance.

“We thought it would be a perfect opportunity because a lot of my friends wanted to go,” Throgmorton said. “We thought what a better way to have an amazing time and bring our best buddies and all go in together.”

Hadden said she was a bit leery only because Charlie has specific, serious care needs and didn’t want him to be the only student with disabilities at the dance. She felt relieved when she showed up at Halle’s house and saw all of Charlie’s classmates with special needs were there as well.

“To see (his mom) have such a reaction of gratefulness, it was a little bit surprising to me because I had just as amazing of a time as Charlie,” Throgmorton said.

Hadden said not many people know how to talk to students with disabilities or want to be involved, so the experience was a surprise blessing.

“To have these 16-year-old kids volunteer to forego their own homecoming night to help these kids was just overwhelming,” Hadden said. “It was just a beautiful thing.”