You are at:Home»Current in Zionsville»Zionsville Community»Zionsville police arrest Sheridan man after vehicle found in pond

Boone County law enforcement officials arrested a Sheridan man early Sept. 17 after he allegedly drove a vehicle into a pond before fleeing on foot. 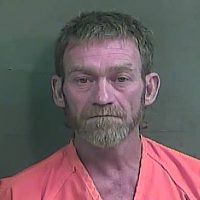 Zionsville police said that an officer attempted to pull over the driver of a 1995 GMC pickup truck at approximately 2:28 a.m. for speeding on US 421 near Interactive Academy. The officer followed the vehicle into the Interactive Academy parking lot and saw that it came to a stop in a pond. When police approached, they did not find anyone in the truck.

Police partnered with the Boone County Sheriff’s Office and the Zionsville Fire Dept. to establish a perimeter and called in a K-9 and drone to search for the suspect.

Police said an off-duty Boone County deputy and Zionsville officer spotted the suspect walking northbound along US 421. Police identified him as Scottie Broadway, 47, of Sheridan. He was arrested for possession of marijuana, possession of paraphernalia, false informing, leaving the scene of an accident and resisting law enforcement.