Between work, school and football practice, Reece Fisher doesn’t have a lot of time for fishing. But when he does get out, he makes the most of each cast. 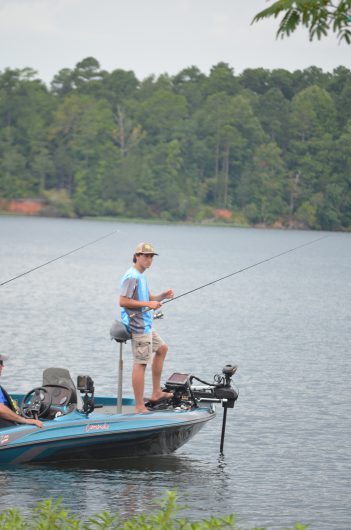 He has the trophies to prove it.

A Westfield High School sophomore, Fisher, 15, has been a tournament bass fisherman for two years. He has competed in – and won – events across Indiana and recently placed fifth at The Bass Federation’s 2017 Junior World Championships on Lake Wateree in Camden, S.C.

For that effort, Fisher reeled in several hundred dollars in scholarship money (he’s unsure of the exact amount) and established himself as one of the nation’s top competitors in the 11- to 15-year-old age group.

He’s been fishing since age 3.

“I enjoy it a lot,” said Fisher, who competed against 34 other anglers at the Aug. 11-12 Junior World. “I enjoy being out on the lake and just the thrill of catching fish, especially if it’s a big one. They pull pretty hard on your line.”

A member of the Indiana Bass Federation, Fisher is the only serious angler in his family. His late grandfather was a recreational fisherman, but neither of his parents, Dawn and Mic Fisher, or younger sister, Addison, takes to the water like he does.

“We bought him a fishing pole from Walmart when he was about 3 years old and took him fishing to our neighborhood pond,” Dawn said. “As he gold older, he and some of his buddies would ride their bikes to different neighborhoods in Westfield and fish the retention ponds.”

Now, he fishes many of Indiana’s largest lakes in age group tournaments. He qualified for the Junior World by winning the Sept. 24, 2016 Indiana Bass Federation State Finals at Tippecanoe Lake. He also has competed in IBF events at Lake Monroe and Geist and Morse reservoirs, among other waterways.

A linebacker on Westfield’s junior varsity football team, Reece has a part-time job and spends what little spare time he has watching fishing videos and researching the latest in lures.

“We think his hobby is great and are happy he has found something he is passionate about,” Dawn said. “We also love that he is outdoors and not inside playing video games. We hope this encourages younger children who enjoy fishing to get involved in the Indiana Bass Federation.”