A trip to the Indiana State Fair is a favorite tradition for Derek Fakehany and Amy Van Ostrand, but this year their visit was extra special. 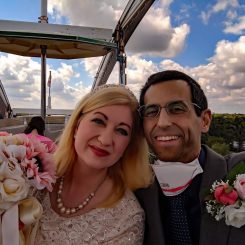 The Carmel couple celebrated their 20th wedding anniversary by renewing their vows Aug. 12 at the Midway, surrounded by dozens of friends and family members.

“It was a ‘pinch me, because this might be the happiest day of my life’ moment,” Van Ostrand said.

It also was a day that at one point they thought might not ever come. In early 2016, Fakehany was diagnosed with a blood cancer. He battled the disease for approximately 20 months, with a second bone marrow transplant proving key to his recovery.

Van Ostrand said her husband’s prognosis is “guarded” and that there is a high rate of relapse for his illness.

“His medical team monitors him closely, and some patients are very blessed to go on and to enjoy years with their families,” she said. “We’re grateful that his second bone marrow transplant is allowing him to live, and we treasure every single day and pray for continued healing.”

The couple have become vocal supporters of the Be the Match, a national bone marrow donation registry, which helped find a donor for Fakehany. More information is available at bethematch.org.

Fakehany’s condition was complicated when the family was forced to move out of their Carmel home of 16 years after repeated flooding led to mold, which can cause serious problems for someone with a weakened immune system. The couple spent tens of thousands of dollars out of pocket to try and remedy the situation and firmly believed that the floods – which never occurred in the historic home prior to 2003 – were caused by failing infrastructure.

The City of Carmel completed pipe upgrades and other drainage improvement projects in the area in 2016, and the home hasn’t flooded since.

“It confirms the correctness of our position all along – namely, that the city and the city alone controlled the infrastructure that both caused 13 years of catastrophic flooding and that now has corrected the flooding,” Van Ostrand said. “We appreciate that they took corrective action but regret that it required we sue them, turn to the media, flee our own home and incur tens of thousands of dollars in damages.”

Van Ostrand and Fakehany filed a lawsuit against Carmel in August 2016 seeking compensation for the more than $88,000 she and Fakehany have spent out-of-pocket on mold remediation, replacing damaged belongings, a lease for temporary housing and other costs. The lawsuit is pending.