You are at:Home»Current in Zionsville»College-bound: Zionsville student with Down syndrome first from state accepted at George Mason 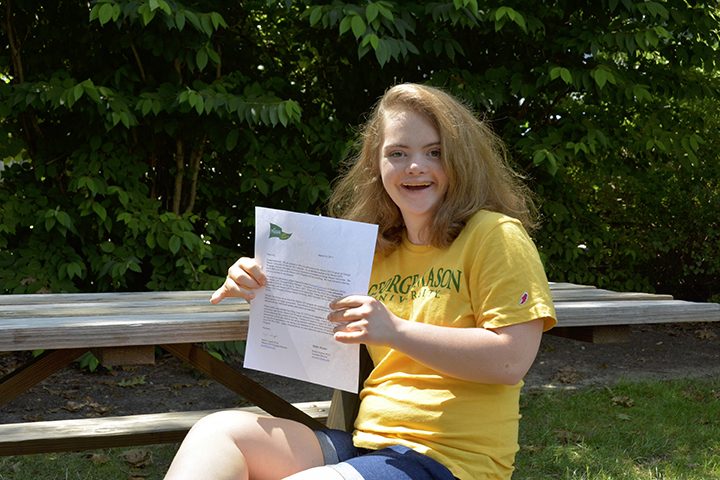 This fall, hundreds of Zionsville Community High School graduates will head to college, but perhaps no family has reason to be more proud than AnnCatherine Heigl’s.

AnnCatherine, known as AC, is one of 16 students in the incoming class of George Mason University’s LIFE program. AC is the first student from Indiana to enter the program since its inception in 2002.

“It was such a cool thing to do school visits with her, because that was not the thing I pictured when we brought her home from the hospital,” said her mother, Laura Heigl.

AC, born with Down syndrome, watched her older brother and sister and their friends visit colleges through the years and looked forward to the same experience.

“She started talking about where she would go to college and what that would look like,” Laura said. “She has pushed for a long time that she was going to college and kept pushing us for options. We knew what she wanted to do, but we didn’t know how to make that happen in a way that would be productive for her. She’s been very driven on college and asking for options, just like everybody else wants options.”

The Mason LIFE Program, open to students with intellectual disabilities, is among the most elite in the country.

“All the other programs around the country are based on what we have done,” Mason LIFE Program office manager Stephanie Atkins said. “We were the first of its kind.”

After four years, students graduate with a certificate of completion with a comprehensive concentration. They are expected to take a certain number of George Mason University catalog classes and develop an area of work specialty.

The school considers demographics with each incoming class to include a diversity of abilities, gender and age.

The Heigl family discovered the LIFE Program through research and AC’s brother, who was a student at Clemson, one of the schools modeling its program after the one at George Mason.

“We were looking for something that really grew her as opposed to a way to kill time,” Laura said.

AC said she applied to four other schools but really wanted to go to George Mason. Clemson was her second choice. 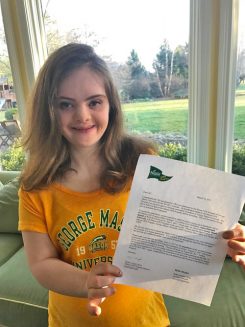 Upon receiving the letter of acceptance, her family was excited, but AC was more nonchalant.

“AnnCatherine was very confident about it,” said Laura, recalling what AC said after leaving the George Mason interview. “‘I nailed it.'”

AC said she received three scholarships and was among 14 students nationally to receive scholarships from Ruby’s Rainbow and from the National Down Syndrome Society. She also was presented a scholarship from the Breakfast Optimist Club of Indianapolis.

In high school, AC was involved in tennis, cheerleading, the French Club and Best Buddies. The Life Program emphasizes extra-curricular activities, and AC already knows what she wants to do while she’s there.

“Best Buddies and cheer,” she said with certainty.

She would like to explore cooking for her work skill, or an occupation with children.

Laura had already helped two of her children get into college but found the process far more complicated for AC because of the high demand for acceptance.

“These college applications were more rigorous than anything my older kids went through,” she said.

Most programs won’t accept a submitted application without a prior visit to the school. Each program had different requirements, such as psychological testing or handwritten essays, and all programs required multiple recommendations. After the first round of eliminations, the schools invite candidates to personal interviews which can last a full day.

Laura hopes others parents of children with Down syndrome recognize that college is a possibility.

“It’s not for everyone,” she said,” but we didn’t even know that we had that option. 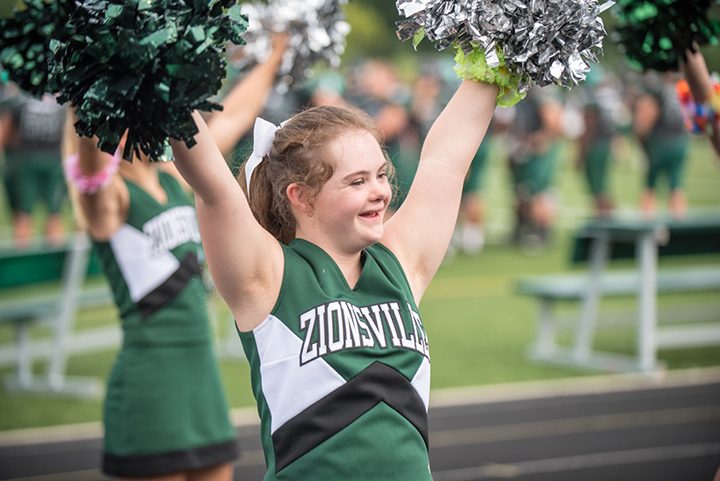 AnnCatherine Heigl participates in cheerleading as a student at ZCHS. (Submitted photo)

Pets: “I’m a cat person.” She named one of her three cats after herself and also owns dogs.