You are at:Home»Current in Westfield»Westfield Washington Schools launches new app for start of the school year, moves away from stationary computer labs 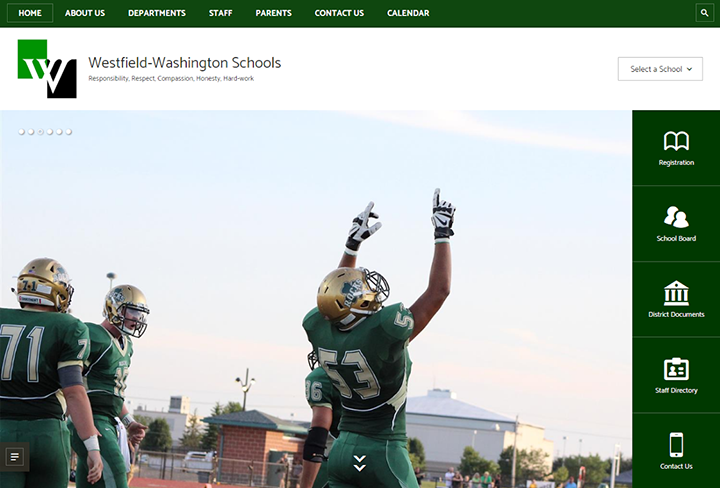 The district website received a facelift before the 2017-18 school year. (Submitted image)

Westfield Washington Schools has announced a new mobile application that is now available for download in the Apple iTunes Store, Google Play and Android devices. The app launched July 5.

“The app was pre-designed by Blackboard.” said Dan Brita, director of technology for Westfield Washington Schools. “The app will feature students’ schedules and grades, the district’s Facebook and Twitter feeds and Moodle.”

The app also has a directory for contact information within the schools and district office. Blackboard Inc. is a course management system and educational technology company which has been credited with creating similar applications for other school districts.

“This is just another avenue of communication for our families,” Brita said. “No matter how much we communicated during the referendum, we were still missing some people in the community. That is why one of our main reasons for the application is simply the convenience factor.”

Supt. Sherry Grate said she hopes parents and non-parents will download the app to learn more about WWS.

“One of my priorities is to communicate with all district stakeholders on a regular basis about what’s going on in our district, including projects like the upcoming construction at our schools,” Grate said. “The WWS app and refreshed website provide yet another platform to get the word out. We hope parents and non-parents alike will download the app and visit the website to learn more about Westfield Washington Schools.”

WWS also is in the process of transforming its regular stationary computer labs into moveable cart options district-wide.

“With the growth we’re seeing in the district, it only made sense,” Brita said. “It is very cost effective.”

Brita also said the move will be beneficial for the schools by adding much-needed space. The district can retrofit the computer labs into classrooms or other learning environments and venues.

“It is really whatever they need to add to that space,” Brita said.

Along with the new application, the district website also received a makeover. Most notable changes are coming to the home screen of the site. For more, visit wws.k12.in.us