You are at:Home»Current in Fishers»Fishers woman represents United States at rowing championships 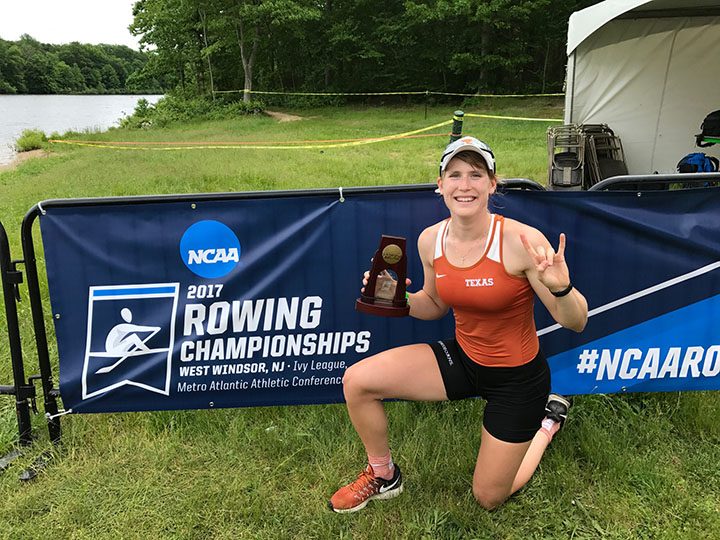 Emily Froehlich, of Fishers, rowed for the U.S. at the 2017 World Rowing Under 23 Championships. (Submitted photo)

Emily Froehlich had no idea rowing would be the sport to lead her to a world competition.

“I’ve never been on this kind of stage with rowing, or with anything, in my life, so I’m excited to experience representing the United States, but also challenging myself and how I hold myself as an athlete,” Froehlich said.

Froehlich, 22, earned a seat in the eight-person boat representing the U.S. at the 2017 World Rowing Under 23 Championships July 19-July 23 in Bulgaria. The team was chosen from athletes participating in the Under 23 National Team Selection Camp this summer in New Jersey, which requires an application from athletes to earn a spot.

Froehlich graduated from Hamilton Southeastern High School in 2013 and began rowing as an intramural sport at Purdue University. She attended a pre-elite camp during the summer of 2014 where she trained with NCAA Division I athletes and realized she could keep up.

“I could kind of hang with the group there, and I was kind of surprised, and then I was like, maybe I should see what options there are and see where rowing could take me outside of Purdue,” she said. “I felt like I had kind of started outgrowing the program there.”

College coaches reached out to see if Froehlich would be interested in transferring universities, so she began to search on her own. She narrowed down the choices to Ohio State University and the University of Texas. After visiting both, Froehlich said she and her sister prayed about the decision.

“When we had finished praying, we looked at each other and both said ‘Texas’ at the same time,” Froehlich said. “We just knew that that was where God had put on both of our hearts where to go.”

She transferred to Texas in January 2015, and the rowing team placed seventh in the nation that year. Froehlich has one more year of school and rowing before graduation. She said she might pursue a career in rowing, exercise science or psychology, but she is leaving that decision up to God.