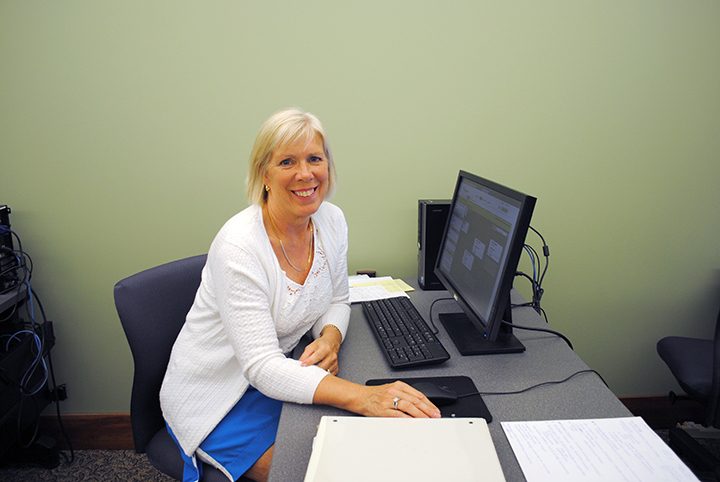 Cathy Jones sits at a computer during a genealogy lab session at the Carmel Clay Public Library. Jones said piecing together her family history is a challenge that makes her feel like a detective. (Photo by Christine Fernando)

Michael Draper’s addiction began at age 8 with one simple question: “Would you like to learn about your ancestry?”

With nothing better to do, Draper learned about his family history alongside a librarian at his local library. He has been addicted to genealogy ever since.

“Everyone here in this room is addicted,” he said with a laugh. “And there’s no addiction recovery, so be careful. You may walk in today and leave an addict.”

Draper now volunteers at Carmel Clay Public Library’s genealogy lab where he introduces ancestry rookies to the ropes every Tuesday and Thursday. He starts with a free database called Family Search and a paid database called Ancestry.com that is offered for free at CCPL.

The library also offers genealogy forums that attract 30 to 50 people and discuss anything from publishing to DNA.

Frequent attendee Cathy Jones said she feels like a detective when she explores the databases. She said it is the challenge and the stories that make genealogy so addicting.

Some of the stories in her family history include the first Massachusetts Bay Colony divorce and her great grandfather’s children who were involved with the Underground Railroad.

“You live history through your family,” she said.

Genealogy has led her to records offices and libraries in Canada, Germany and Ireland. It has taught her about herself and her family and history. It has honed her teaching and analytical skills, and it has shown her the hardships people face and their resilience.

For Jones, her passion fills more than her 65 genealogy notebooks.

“This fills my soul,” she said.

A former medical researcher at Lilly Research Labs, Draper said the connection between genealogy and the scientific method fed his addiction.

“You ask a question, you find an answer,” he said.

Despite the method, plenty of obstacles arise along the way. He often finds two people with the same name. Other times, documents get lost or destroyed. Some people, especially in certain time periods or regions, simply don’t have a lot of indexed documents.

Searching for information online is faster than going to libraries and offices and flipping through documents page by page, he said.

“What once took years now may only take a couple hours,” Draper said.

But the original process is still the same. And it begins by finding original sources—the building blocks of the big picture.

“The beauty is in the records and using them to put together stories about reality, what might have happened,” he said.

Some of Draper’s family stories include an inmate described as “incorrigible” by guards at a federal prison in Moline, Ill., a 14-year-old who may have defied her parents by getting married and a distant cousin named Cockshott Pickles.

For people just starting to unearth their family histories, Jones recommends starting with what they know and using databases to build from there.

Eventually, Draper said beginners will start to explore something innate within them that makes them wonder while uncovering something precious.