You are at:Home»Current in Zionsville»A tale of 2 police dogs: ZPD K-9 makes ‘shocking’ recovery while other enters retirement

As one Zionsville Police Dept. K-9 continues to make a startling recovery, another has retired from the force because of mounting health issues. 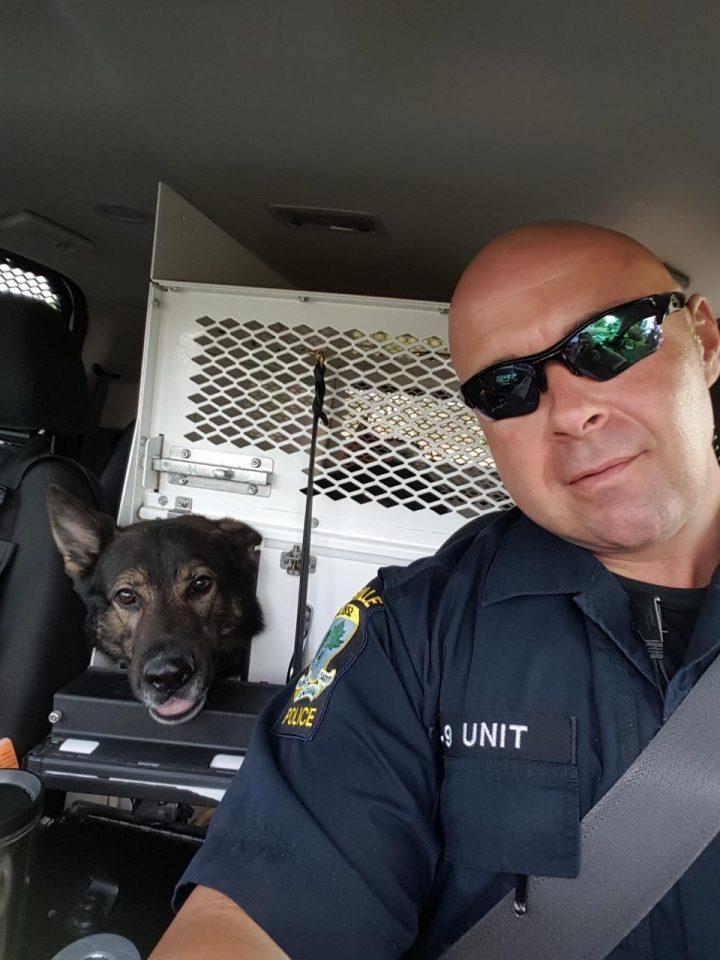 Jelka, a 2-year-old Belgian Malinois who was struck by a pickup truck May 15, is expected to return to full duty in August or September. She is scheduled to have her cast removed July 18.

“Hopefully, once that cast is off she will be able to ride with me to get her back into the swing of things,” said her handler, ZPD officer Josh Stutesman.

The accident left Jelka with a fractured leg, a hole in her diaphragm and a punctured lung. Veterinarians originally gave her a 5 percent chance to survive, Stutesman said, and they’ve been “absolutely shocked” at her recovery.

“She’s ready to go back to full duty,” he said. “She’s getting stronger every single day. She’s utilizing that leg a little more to walk. She’s basically getting back to her normal self with just a little bit of a limp.”

The ZPD K-9 program is funded by donations. Since Jelka’s accident, the community has raised about $13,000 for her recovery, enough to cover nearly all of her medical bills.

Stutesman is planning for Jelka to give the K-9 demonstrations at the Zionsville Lions Club’s annual Fall Festival, set for Sept. 8 to 10 in Lions Park.

“As of right now that is our plan,” he said. “If something does change, she’ll at least be out there to thank people.”

ZPD’s other K-9, Eso, is facing a much different future after being diagnosed with hip dysplasia, arthritis, irritable bowel syndrome and other issues this year. After much consideration, ZPD Chief Robert Knox and Eso’s handler, Sgt. Brad Keifer, decided to retire the 7-year-old Czechoslovakian shepherd to give him a better quality of life.

“It was really hard because the community really loved him and everyone on the department loved him. It was almost like retiring one of us,” Keifer said. “It was a decision that wasn’t made lightly.”

Eso joined ZPD in 2013. He is now living with Keifer, his wife and two children as a family pet. Keifer said it took a while to get used to going to work without his longtime partner.

“Coming out to traffic stops, or if we have someone who takes off running, at first my first instinct would be (to) pop the door open and he could get out and start chasing,” Keifer said. “I had to keep reminding myself I don’t have that backup with me anymore.”

Although he enjoyed his time working with a K-9, Keifer has decided to step back from that role if ZPD acquires another police dog, which is the plan.

“It’s time to let someone else do it,” he said. “We’ve got some younger guys in the department who will be great.”