You are at:Home»Current in Carmel»Column: Washington’s National Cathedral 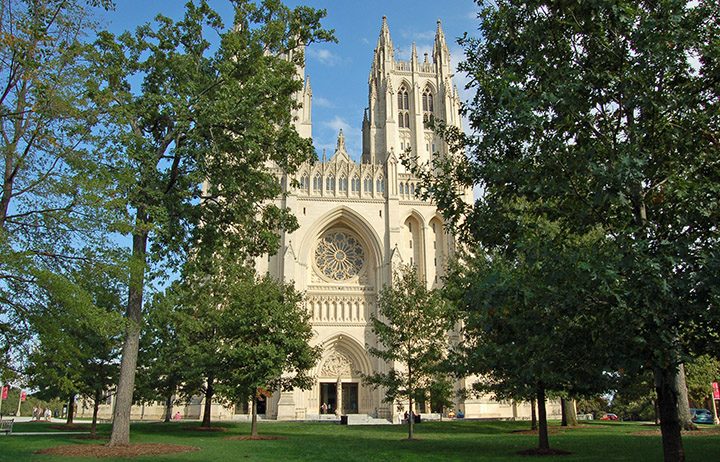 Western End of the National Cathedral (Photo by Don Knebel)

The Cathedral Church of Saint Peter and Saint Paul is a stunning example of Gothic architecture, American-style. Its popular name, the National Cathedral, is a little misleading.

In 1791, when Pierre L’Enfant laid out what became Washington, D.C., he reserved Lot D for “a great church for national purposes.” Because of concerns about church/state separation, nothing came of the idea, and Lot D became the location of the National Portrait Museum. Nonetheless, the dream of a national church persisted. In 1893. President Benjamin Harrison signed a Congressional charter authorizing the Protestant Episcopal Church Foundation to establish a cathedral, the seat of the Bishop, within the District of Columbia. On September 29, 1907, following an address by President Theodore Roosevelt, workers began construction on a 57-acre site atop Mount Saint Alban, named for the first British Christian martyr and the highest point in the city. Built entirely with private funds, the cathedral was completed 83 years to the day later, when it was dedicated by President George H.W. Bush.

Erected primarily from Indiana limestone, the National Cathedral is the sixth-largest cathedral in the world, featuring 234-foot twin towers at the western end and a 301-foot  tower near the center. The design, inspired by the great cathedrals of Europe, incorporates flying buttresses, a magnificent rose window and 112 gargoyles. The cathedral’s 215 stained glass windows portray religious and historical events, with a window honoring space flight incorporating a piece of lunar rock. One of its many limestone grotesques, deflecting rain water, represents the head of Darth Vader.