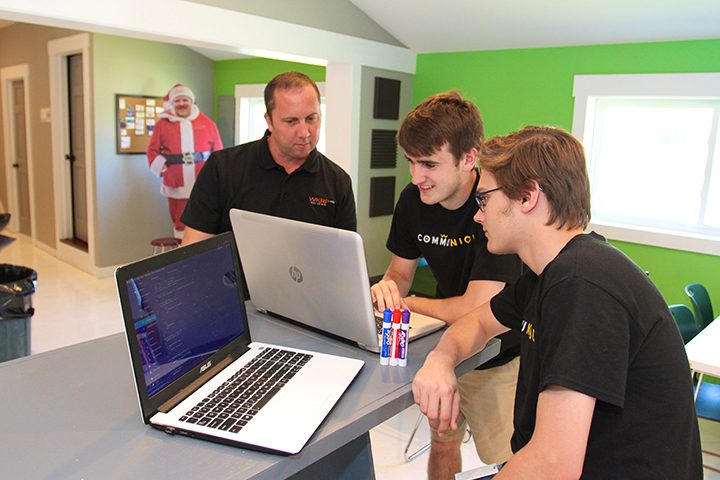 Curt Whitesell invested in a new business which will aid nonprofits and provide developers with volunteer hours. From left, Curt Whitesell and Communicode co-owners Trevor Crupi and Cooper Campbell. (Photo by Sadie Hunter)

Cooper Campbell and Trevor Crupi are 2017 Westfield High School graduates, but they are already putting their skillsets to good use.

On July 1, they will launch Communicode, a coding company aimed at assisting nonprofits with websites and marketing tools. The company connects nonprofits with programmers searching for volunteer work.

The idea originated three years ago, when Crupi and Campbell were coding with some friends and realized many nonprofit websites weren’t very attractive.

“Most people’s first interaction with a nonprofit is their website,” Campbell said. “When all of (the websites) are a jumbled mess of text, it’s hard to find out when and where (the nonprofit) is meeting. We are really enabling them to increase their own effectiveness in the community.”

The co-owners created an algorithm to match the nonprofits with programmers. Neither the nonprofit nor the programmer has to live in Indiana, or even the United States. The algorithm connects nonprofits and programmers which selects similar sets of interests, such as environment, sports or education.

Crupi and Campbell are exploring ways to make their company profitable. The basic program  provides nonprofits with volunteer services.

“We have a whole array of ideas we can implement,” Campbell said. “We can start by having different levels of accounts, for instance a nonprofit that just needs a small website that consists of one page, that would take minimal time and effort for a developer to make. Developers are less likely to voluntarily do a website that is 15 pages long and take 70 hours just out of their own goodwill. That’s a lot of time and effort they could be using at work. We could have different tiers of accounts, where the developer pays $5 for a premium account per month to have access (to a larger pool of nonprofits). Nonprofits then pay (the developer), but it will be extremely discounted for the nonprofit going through Communicode.”

Another plan they may implement is charging nonprofits to boost their work to developers’ feeds once it is posted.

However, Campbell’s and Crupi’s immediate focus is on launching their company. When they leave for Purdue in the fall (Campbell will major in chemical engineering and Crupi in computer science), they will still operate the company remotely, relying on the other 13 members to work on it locally. 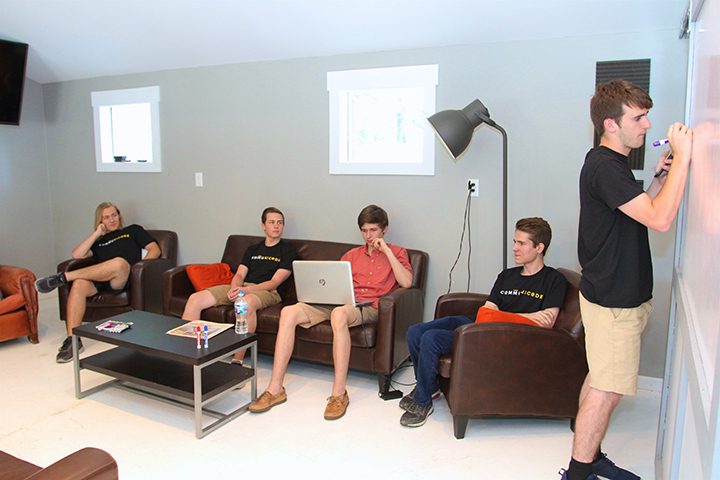 Communicode originally launched as a Westfield High School club, where co-owners Trevor Crupi and Cooper Campbell held a callout meeting where 18 students showed up. The co-owners then joined a competition similar to Shark Tank put on by the high school’s Idea Farm program. The competition involved student-created companies pitted against each other. Certain members of the community selected a a winner.

Communicode didn’t win but did reach the final tier. It attracted attention from WKRP Indy Real Estate owner Curt Whitesell, one of the competition judges. Whitesell decided to invest in Communicode, and now the company functions out of the Union, a co-working space operated by Whitesell.

“To me, they were the most structured from an organization standpoint,” Whitesell said on why he invested in the group. “All they needed was the business side, and that comes from experience. They had the energy and a really strong passion about one thing as a group, which is really impressive. These guys are filling a void that development companies aren’t taking advantage of.”