You are at:Home»Current in Fishers»Diet leads to Smoothie King franchise purchase 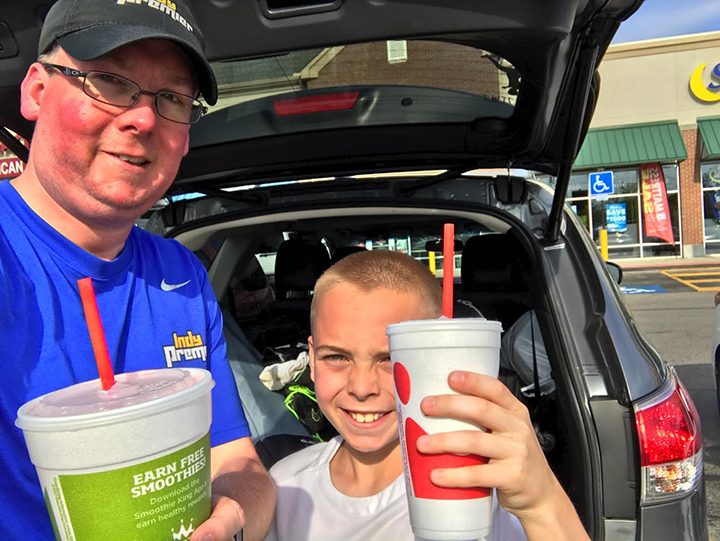 Christian Hamm drinks a Smoothie King smoothie with his son Noah, who originally told him about Smoothie King. (Submitted photo)

In April 2016, Christian Hamm went to the doctor for his annual physical.

Hamm realized it was time for a change, which was to start losing weight.

“Since I got married 13 years ago, I kept putting on weight,” Hamm said. “I decided I was done with that. I committed to changing my diet and giving up caffeine and giving up the morning stops for fast food breakfast on the way to work. My son Noah was the one who told me about Smoothie King. His grandmother had taken him to one in Illinois and he just loved it. Then he told me there was one in Fishers.”

From there, Hamm went to a Fishers location on 96th Street and was hooked.

Hamm decided it was a splendid idea after further research. He secured franchise rights earlier this year. He recently signed a lease for a store in The Edge building at 116th Street and Lantern Road. He said it is projected to open in late August.

The 6-foot tall, 200-pound Fishers resident has lost 40 pounds since starting the diet.

“My favorite smoothie, and the steady for my diet regimen, is the medium strawberry shredder with additional diet down enhancer, multi-vitamin and fiber blend,” he said.

Hamm, who turns 40 June 27, is taking a career exploration leave from teaching language arts and social studies at Riverside Intermediate School in Fishers.

“I’ll be concentrating on the Smoothie King and then make a decision whether I go back to the classroom (in 2018-19),” he said. “A lot of it will come if I have that tug in my heart of going back to the classroom or I feel like what I’m providing to the community is fulfilling what I hoped it would.”

Hamm has taught in Hamilton Southeastern Schools for 10 years, eight at Riverside. Prior to that, he was in the business world and transitioned into teaching through Anderson University.

Before securing the franchise rights, Hamm went to New Orleans to learn more about Smoothie King.

“They are trying to inspire people to live a healthy and active lifestyle, which is the same thing I set out for myself to do,” Hamm said.

Hamm and his wife Jennifer, a pharmacist, also have a daughter, Emily.