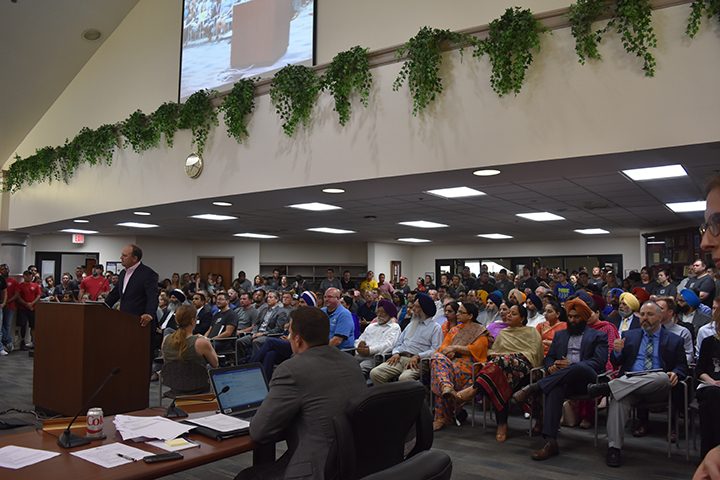 Sikhs are devotees of Sikhism, a monotheistic religion founded in Punjab in the 15th century by Guru Nanak.

It’s estimated that there are around 10,000 Sikhs living in Indiana, and approximately 3,500 of those own small businesses. Gurinder Singh Khalsa, founder of Sikhs Political Action Committee, also spoke at the event.

“Sikhs have been in the United States for over 100 years and in Indiana for over 50 years. I spoke about us wanting to show who we are and what we stand for,” Singh Khalsa said.

The event was well-attended by both members of the Sikh community and Fishers residents. Indian snacks were served.

“Mayor Fadness took the extra time to participate in both the state and the Fishers level, which we appreciate,” Singh Khalsa said.

The event has inspired SPAC to continue and grow its community involvement.

“We want to engage and empower those who are less fortunate. Sikhs are the fastest growing business community in Indiana, so we want to give back to these communities,” Singh Khalsa said. “We’re planning to give to more charities and start more foundations and scholarships.”

SPAC also plans to participate in the Fishers Freedom Festival later this summer.

“Last year was the first time we participated. We served complimentary soft drinks. This year we want to do more,” Singh Khalsa said. “Most likely we will be serving Indian food and drinks, and we will have a float in the parade. Everyone is welcome.”