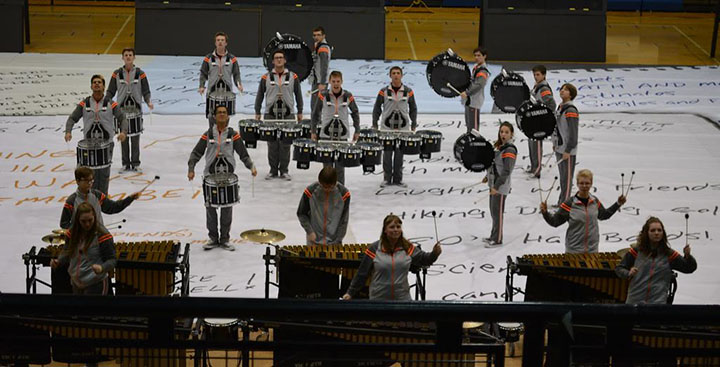 An important piece of that is the CHS Annual Percussion Clinic, Drumline Director Jeff Queen said. The clinic is set from 9 a.m. to 1 p.m. May 20 for boys and girls in fourth through eighth grades. A performance for parents will follow at 1 p.m.

Junior Matt Story has helped with the clinic each year he has been in high school and plans to do so again.

“I think that the clinic is extremely beneficial to all future members due to the fact that it is hands-on experience in the activity that they will eventually be a part of,” Story said. “It gives future members the opportunity to get an early feel and understanding of what drumline really is and what it is like to be a part of the line.”

“This was our second year in Open Class, and we were very competitive the whole year with the groups around us, and the students all had a great time putting the show together and competing,” said Queen, whose group placed first at invitationals at Franklin Central and New Palestine high schools in February.

“We are still a relatively young program, and each year we learn what works and what doesn’t and try to apply those lessons in the future,” Story said. “This year, I feel like that is a philosophy that we really took to heart. I remember being in rehearsal some days, stopping, taking a look around, and just appreciating how far we were at that moment compared to other years.”

Senior Sammy Bonnet said the squad has improved how it approaches rehearsals.

“After a year of playing together and getting better, we definitely improved our ability to hear each other and be able to adjust to what each section is doing while improving our own individual skills,” Bonnet said.

To register for the clinic, visit carmelbands.wufoo.com/forms/2017-annual-percussion-clinic/.