Trauma kits for Whitestown Police officers, stocked with everything from bandages to tourniquets, aren’t new. But officers now a have another tool to help keep them safe. It’s called CELOX-A, and it’s designed to help stop bleeding from gunshot and stab wounds until medical help arrives. 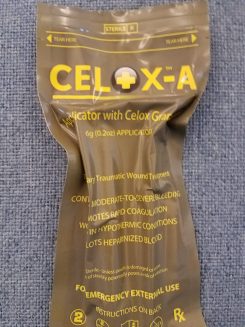 CELOX-A is injected directly into a wound to prevent excessive bleeding. (Submitted photo)

“I wanted to give my guys one more tool in the toolbox to be able to survive a knifing or a shooting to give them that much more of a success percentage to get them to that trauma center,” WPD Chief Dennis Anderson said.

CELOX-A is a blood clotting agent. The difference between it and blood clotting packets found in most trauma kits is that it is delivered via a syringe into the wound.

“You actually probe with a finger to see how deep the wound goes and then insert this into the bottom of the wound and then start applying it from the inside out versus outside in,” Anderson said. “You fill the gunshot hole with the blood clotting material, and then once at the skin surface you put a 4 by 4 (inch) patch on top, and you apply pressure for three minutes.”

Officers trained on the procedure in late April. They learned how to apply the CELOX-A and wrap the injury using part of the syringe so it is clearly visible to ER staff to make them aware a patient has been given the blood clotting agent.

“The ER docs seem to like it. It is easily flushable with saline solution so it doesn’t hamper anything as far as taking them to surgery,” Anderson said.

The one-use syringe costs $21 each. Every Whitestown officer, 24 full-time and nine reserves, carries it. The medic ambulance also is stocked with three syringes of CELOX-A. The department purchased a reserve supply, which has a shelf life of five years.

“I try to be very proactive with our agency and making sure our guys have everything they need to survive a major encounter, and this is just one more thing to have,” Anderson said. “I certainly don’t want to look a family in the face and say for $21 your husband or wife would still be here today.”