Westfield is in a boom growth period.  That is putting a strain on the schools’ capacities.

“We are the fastest growing school district in Indiana,” Westfield Washington Schools Supt. Sherry Grate said. “According to a demographics study, we are forecast to grow up to 1,700 in the next five to 10 years.” 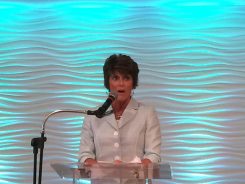 Supt. Sherry Grate speaking at the Westfield Chamber of Commerce luncheon about the construction referendum (Photo by Mark Ambrogi)

The Westfield Washington Schools have grown by more than 1,000 students since 2012. So, officials determined more space is needed, and a construction referendum will be on the May 2 ballot. Grate spoke on the need for the construction referendum to expand the high school, middle school and immediate school at the Westfield Chamber of Commerce luncheon April 20 at The Palomino Ballroom in Zionsville. The referendum calls for a 30-cent increase on a $100 assessed value. It is estimated that would generate as much as $90 million to the expansion and renovations needed for those three schools.

There were focus groups to determine the community members’ preference for handling the growth.

Grate said grades 5-12  is where most of the rapid growth in the schools is occurring.

“It’s not that it’s coming, it’s here,” Grate said. “We must do something. We also need to have facilities in our schools that really need to be maintained. If you have a state-of-the-art school district, it’s important to have facilities that are safe. This is a community investment in the schools for your children, your future

“We have an amazing reputation for success, and that’s something we very much want to continue in Westfield,” Grate added.

“These monies will be taken from our already strained capital products funds,” Grate said.

Helen Metken, from Re/Max Ascent and Metropolitan Indianapolis Board of Realtors, spoke about the importance of strong schools to a community. A MIBOR survey shows  safety is No. 1 and schools are No. 2 among what the region’s community members value most. In Hamilton County, the survey had schools No. 1.