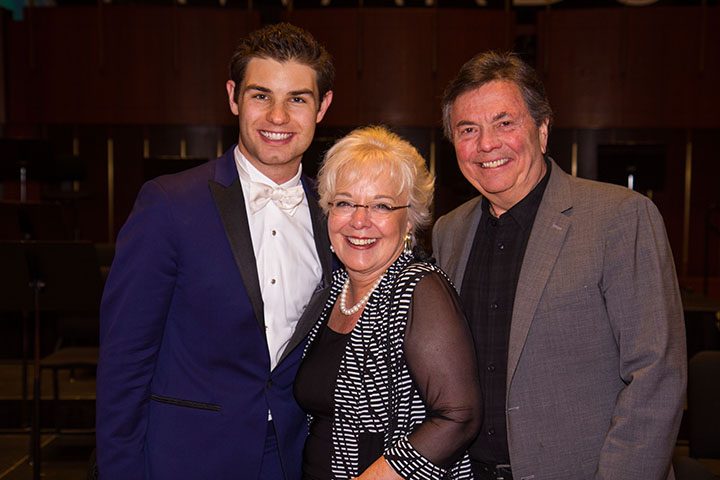 “It’s been a joy to have to spend multiple visits with them as they come and go in the Indianapolis area,” said Nine, an APA board member. “To drive from Carmel to our events downtown, it’s 30 minutes. You really get to know these guys, because they’re trapped in your car.”

Janet and her husband, John, hosted Drew Petersen, who was named the 2017 American Pianists Awards winner this month after a 13-month competition, earning the Christel DeHaan Classical Fellowship. It was Petersen’s third stay with the Nines. Petersen was one of five finalists who performed in a week of solo recitals, chamber concerts, the premiere of a commissioned work and outreach performances. Petersen, from Oradell, N.J., graduated from Harvard at age 19 and will graduate from his master’s program at Juilliard School in June. He will enroll in the Juilliard prestigious Artist Diploma program in the fall.

The APA award, given every four years to a classical pianist, is valued at $100,000. It includes a recording contract with Steinway & Sons, two years of career advancement and support, abundant performance opportunities and a $50,000 cash prize.

Petersen will perform a concert exclusively for donors to APA at the Nine home. To donate, visit americanpianists.org/support/donate-as-individual.

Petersen, 23, will serve one week per semester at the University of Indianapolis as an artist-in-residence for the next two school years. He will continue to stay with the Nines when at UIndy.

“It’s fun to cultivate this relationship with such wonderful people,” Petersen said. “I’m so thankful that I was put with Janet and John.”

Nine hosted Eric Zuber as a 2013 APA finalist. Now he has returned to stay with the Nines while he substitutes for a piano professor this semester at Ball State.

The Nines moved to Carmel from New Jersey in 2001 after retiring. They wanted to be closer to their two daughters, Jenna and Jannell, who lived in Indianapolis then but now both live in Carmel.