You are at:Home»Current in Carmel»Carmel Cover Stories»Running for a reason: Carmel Marathon participants motivation for April 22 race 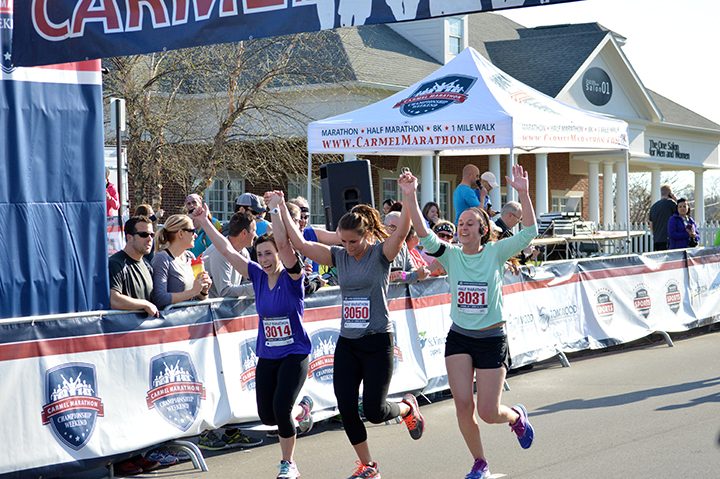 From left, Natalie Grissom, Haley Richter and Stacey Wierman cross the finish line of the 2016 Carmel Half Marathon. (Submitted photo)

There were more than 3,800 finishers in the 2016 Carmel Marathon. Each has his or her own reason for running. It could be a hobby or an obsession. It could be a way to get into shape or achieve new goals.

As the April 22 race approaches, here are some inspiring stories from 2017 participants. 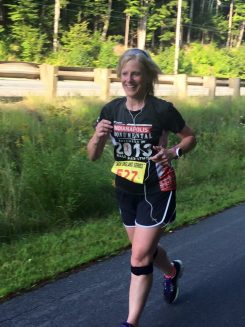 Janice Martin will run her 100th half marathon in Carmel. (Submitted photo)

Janice Martin, 55, ran her first half marathon in 2005. Through the years, she started running more.  She has run about 80 half marathons in the past five years and has competed in 43 states. Her goal is to run in all 50 states.

Last March, during a race in Washington D.C., the Indianapolis resident realized her 100th half marathon was approaching soon.

“I had to decide where I wanted my 100th to be, and I wanted it to be special, so I picked the Carmel Marathon,” she said. “I’ve participated every year, and so it seemed fitting.”

In honor of her 100th half marathon, Martin hopes to raise $2,500 for Back on My Feet, a national organization “that combats homelessness through the power of running, community support and essential employment and housing resources,” according to its Web site. So far, she’s raised more than $2,000 as of April 4.

Her fastest time was 1 hour and 55 minutes during the Monumental Marathon in Indianapolis in 2013. She goes through about six pairs of running shoes a year and tries her best not to get injured.

“I’ve become very good friends with a chiropractor,” she joked.

Some places she won’t push for a personal record and will instead take her time and absorb the scenery. She loved running a half marathon in a small town in Nebraska where a ticket to the local fair was included in the registration price. She enjoys traveling to new places with her husband, Patrick, and discovering local businesses.

It can get difficult. Martin is a certified public accountant in Indianapolis and she has her busy season when she can’t schedule trips. But being a CPA can be helpful. She has a very detailed spreadsheet detailing each race she’s ran in and her finishing time.

RUNNING AFTER A ROUGH YEAR 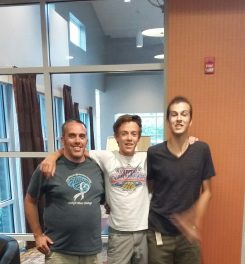 Mike Estes, 43, of Nobesville, had a rough year. Coming off an injury the previous year, he finally got back to running again when he was hit by tragic news: his wife Stephanie was diagnosed with breast cancer.

“The stress of that, and having to do more around home, along with the balance of work, kids and coaching cross country, led to a stop in my running,” Estes said. “As I stopped exercising, I did a fair amount of stress eating, sugar and other junk food, and my weight went up.”

During this time, his father died of kidney failure, adding to his stress.

Estes weighed approximately 185 pounds when he stopped exercising but found himself quickly reaching 232 pounds, his heaviest weight ever.

“I decided it was time to make some drastic changes,” he said. “I signed up for the Carmel Half Marathon in 2016 and used that as added motivation to get back to running and lose weight. As I started running again I cut all sugar out of my diet.” 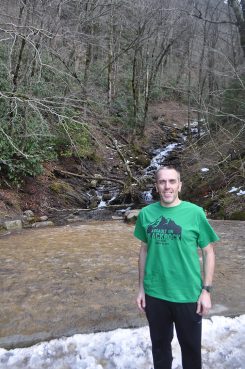 Estes now runs 40 to 50 miles per week and weighs less than 177 pounds. Meeting up with the Carmel Runners Club once or twice a week has kept him accountable.

His wife has also improved. She even ran a 5K on April 8 with the goal to run it without stopping.

“Compared to when she was going through chemo and then radiation, she’s doing well,” he said. “She’s gradually regaining strength and energy and has recently started getting back to running herself.”

For this year’s half marathon, Estes said his goal is to be under 1 hour and 50 minutes, but his ultimate life goal is to keep up with his 12-year-old daughter for a long as possible. She’s the last of his three children he can still run with.

“Since the end of October I’ve had April 22 as a target and a motivator to get my workouts in,” he said. “As the race nears I’m now hoping to set a personal record on race day.”

SETTING THE PACE FOR OTHERS

Rose Scovel, 40, of Indianapolis, jokes that she doesn’t look like a typical runner. 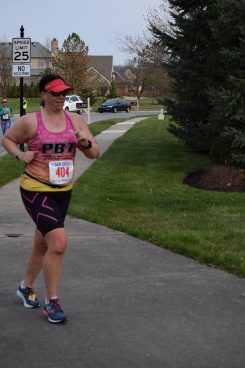 Rose Scovel runs in the 2017 Sam Costa half marathon in Carmel.

“I started walking and running in 2008 after being diagnosed with type 2 diabetes,” she said. “I wasn’t an athlete as a kid, and I still don’t look like one. I am not competitive with anyone but myself and the clock. But I work hard and keep setting new goals.”

“That first year was tough, it was six days after my first full marathon finish and it was hot and I felt awful but I finished,” she said. “The course is interesting and there are always good stories that come out of it.”

As a pacer, runners follow her during the race to make sure they are at the speed they want to maintain. But this year she can go as fast or slow as she wants.

She’s had her ups and downs over the years but she keeps running. She was unable to finish her first full marathon attempt in 2009 at the Monumental Marathon in Indianapolis but finally checked it off her list in 2011 in San Diego.

“There are so many good stories, because I race a lot,” she said. “In some ways, they are all impressive for me.”

RUNNING IN ALL 50 STATES

Canadian Alan Swankie has seen a lot of the U.S. as a runner. 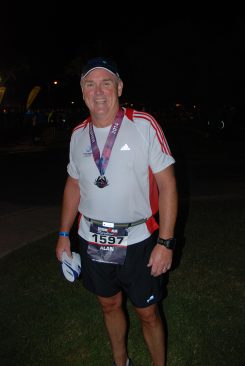 Alan Swankie will complete his goal to run a marathon in all 50 states at the Carmel Marathon.

The 45-year-old, who lives near Toronto, decided in 2012 that he’d try to run full marathon races in all 50 states.

“Through no fault of my own, I accumulated about 15 states when I went away in the wintertime to catch a little sun,” he said. “The company I worked for closed in 2011 and with the prospect of a lot of free time on my hands, I considered finishing another 35 states and joining the 50 States Marathon Club.”

Swankie started running in 2001 because he felt the need to get in shape as he and his wife were adopting their first child.

“Like many executives, I was carrying some extra weight and had a fairly sedentary lifestyle, save the odd game of golf or ski vacation,” he said. “Some of our sales staff at work approached me to have the company sponsor a relay for the Toronto Marathon and asked me to join their team. How could I say no?”

Now he plans to make the Carmel Marathon the race that brings him to his 50 state goal.

“I chose Indiana as my final state as it is a driveable distance from home, which was important for the number of friends who wanted to come,” he said. “It’s relatively flat and Carmel has a reputation for being a pretty nice place, similar to my hometown of Oakville. I’m excited to be in Carmel for the weekend and to finish my quest.”

PACKET PICKUP — There will be no registration or packet pick up on race day. Registration will be available at the Fitness Expo at the Monon Community Center on from 11 a.m. to 9 p.m. April 21