You are at:Home»Current in Zionsville»Boone REMC lineman helps bring electricity to Guatemalan village 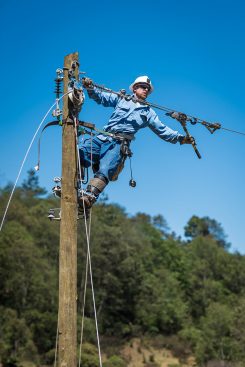 Michael Bowman works to bring electricity to a village in Guatemala. (Submitted photo)

For two weeks in March, Michael Bowman performed some of the toughest work of his career. The Boone REMC lead journeyman lineman was part of a crew working to bring electricity to the small village of El Zapotillo in the mountainous Cuilco, Huehuetenango region of Guatemala.

“I’m used to all of the updated hydraulic equipment we have, so I wanted to see what it was like when it first started, which was setting poles by hand, climbing up and doing it all manually,” Bowman said. “I knew it would be hard work, but once I got there and got to know the people, it became more personal.”

The trip was part of the “Project Indiana: Empowering Global Communities for a Better Tomorrow” initiative that has helped bring hope in the form of electricity to four rural Guatemalan villages since 2012. Bowman was one of 16 electric cooperative linemen from the state to take part in the project.

“It was humbling work. We were at 10,000 feet up and we weren’t used to the altitude at all. I’d climb a pole and get about half way up and have to sit there and catch my breath,” Bowman said. “The locals were the ones to take the wire from pole to pole, and they’d take it and throw it over their shoulders and just go up and down the hills. It was amazing to watch them work.”

Although the work was tough, Bowman said it was worth it to see the expression on villagers’ faces as the crew started to energize the homes.

“We would get the family outside the house and throw the switch to energize it and their eyes would get so big,” he said. “We are used to it but they aren’t, and some people had tears in their eyes. The biggest thing for me was the kids because I have two of my own. They’d look at us not knowing what to think. It was just a strange feeling.”

Now that’s he home in Whitestown, Bowman said he’d do it all over again.

“You know you made a difference in a lot of people’s lives,” he said. “Just knowing that little bit of electricity will help them meant a lot.”