You are at:Home»Current in Zionsville»Zionsville man donates handmade blankets to ZPD to comfort kids

Clayton Shelburne is comforting children across Boone County by providing them with the warmth and security of a brand new blanket. 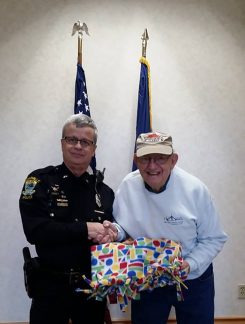 Shelburne, 88, has donated handmade fleece blankets that will be placed in each of the Zionsville Police Dept. patrol cars.

“Years ago the patrolmen used to have teddy bears that they would give to kids in crisis, so I came up with the idea of giving them blankets,” Shelburne said.

Shelburne began making blankets with his late wife through their camping club and church, New Hope Christian Church in Whitestown. Previously, he had only worked on a part of the blanket-making process. Last December, Shelburne decided he wanted to try his hand at making the blankets on his own.

“I love to make them. I like to do things using my hands, which I’ve always done most of my life. I know, at least I think I know, that some kids at least somewhere down the line will benefit from the blankets,” he said. “I just did it from the bottom of my heart.”

Shelburne said he hopes the children are comforted by the blankets. The blankets are decorated with animal prints, bright colors, teddy bears and paw prints.

“When you can give [the kids]some kind of tangible item like this, it just means so much for the psychology of it all. They can be a kid.” ZPD Chief Robert Knox said. “Mr. Shelburne is just the sweetest guy. It’s just such a nice thing. We were more than happy to receive his generous donation. I carry one in in my car.”

Shelburne said it takes him about an hour and a half to create each blanket. He has donated 38 blankets to the police department and said that he will continue to replenish the blankets as they are given to children throughout the community.

“It’s more of a goodwill gesture towards the kids looking up to a patrolman as a friend, instead of enemy. They are friends of kids,” he said.

Shelburne is currently working on a batch of blankets to donate to the Boone County Sheriff’s Dept. He said his time is free and the material is purchased using donations from family, friends and community members.