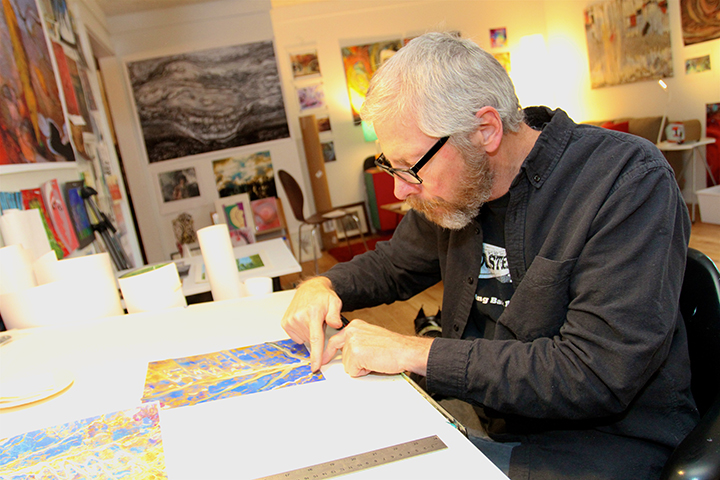 “I was creative before Parkinson’s, but after it, I needed something to do,” said Lowe, who was diagnosed with Parkinson’s in 2009. “I got more of an urge to do art than I did before. I’ve never done so much art in my life, and I can’t stop doing it.”

The Geist resident used to do more photo impressions and more detailed artwork, but since the Parkinson’s progression, he has reinvented his approach to art. 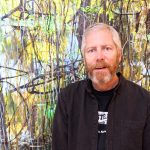 “I had never been able to paint with my feelings and thoughts (before Parkinson’s),” Lowe said. “I was a graphic designer, and I had to document something exactly.”

Now, his specialty is abstract paintings.

“The stuff I’m doing now with Parkinson’s is some of the best stuff I’ve ever done,” Lowe said. “It’s not conservative. I purposely am trying not to be afraid to let my mind go. Some of these pieces are from deep down in my soul. Some of these pieces I can’t even interpret where they came from. They came from me, but a part of me I haven’t got in touch with, the subconscious side.”

Some of Lowe’s art has been influenced from his time at Rock Steady Boxing, a nonprofit that helps those with Parkinson’s improve their quality of life with non-contact boxing. Lowe, 63, has been working out at Rocky Steady three times each week for the past two years.

Lowe’s exhibit “Artist Boxer – This is my Parkinson’s” will debut from 6 to 9 p.m. April 7 at the Indianapolis Downtown Artists and Dealers Association First Friday Art Tour at the Indiana Landmarks Rapp Family Gallery, 1201 Central Ave., Indianapolis. The exhibit will continue through the rest of April, and a portion of the proceeds will assist the continuing growth of Rock Steady.

Lowe has begun to do finger paintings, which makes it more accessible for him to produce new work. It also is therapeutic.

“I don’t have the fine motor skills I used to have,” Lowe said. “I have a slight shakiness.”

Lowe is driven, often staying up all night working on his pieces.

“I have all these ideas and my mind is spinning all the time,” said Lowe, who works out of his home studio. “I can’t stop creating. This is all of me out there now.”

His advice to other artists is, ‘Don’t be afraid to create, just let yourself go.”

Although he was diagnosed in 2009, Lowe said it’s likely he had developed Parkinson’s a couple of years before doctors determined it.

“What was interesting in my case is about two weeks after I was diagnosed, I was feeling depressed, then I was diagnosed with colon cancer,” Lowe said. “I went through a fairly long time where I didn’t want to do anything. I was in a big hole. I was a mess.”

Eventually, Lowe survived cancer and pulled out of his funk.

At that time, Lowe was teaching art for Indianapolis Public Schools, working with kids with emotional disabilities.

“It was kind of an art therapy for them,” Lowe said. “I loved that. I had all kinds of jobs in the arts, and that was my favorite. I was like an artist on wheels, driving to different schools.”

Lowe said he decided two years ago it was time to retire and devote all of his time to his artwork.

Lowe said he has been away from the arts world exhibit scene for 10 years.

“So this is my big coming out,” Lowe said of his exhibit featuring his abstract art. “It’s a big deal to get all my art work out there and see how they react to it.”

From 2000 to 2002, Lowe was president and show chairman of the Stutz Artist Association. He had a one-man show at Clowes Memorial Hall in 2002.

Lowe, whose wife Mary is director of special services for Washington Township Schools, designed the Riley Hospital for Children’s specialty license plate logo of the kids in the red wagon. 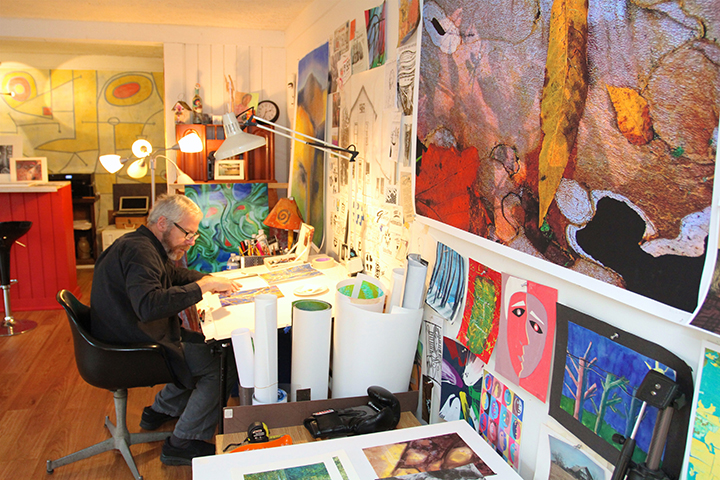 After being diagnosed with Parkinson’s in 2009, Wendell Lowe began making art with a finger- painting technique. (Photo by Sadie Hunter)

Lowe has benefited from his time working with Rock Steady, both mentally and physically.

“It’s neat to be around a bunch of guys that are going through the same thing you are,” Lowe said. “It’s an intense, physical workout that keeps you ahead of the Parkinson’s. If you keep moving and exercising, it’s already been proven that this is a major treatment for Parkinson’s. It keeps you moving. (Parkinson’s is) still progressing but not as rapidly,  and that’s because of the physical workouts.”

Lowe said it was constantly recommended that he try Rock Steady, and he finally did.

“If I wasn’t doing Rock Steady, I’d probably be in the recliner chair watching TV,” he said. “I probably wouldn’t live as long.”

“I think the personal journey that he went through to get where he is, part of it was the physical training through Rock Steady,” Timberlake said.

Just as important are the friendships with fellow Parkinson patients.

“It’s a group that encourages each other and understand each other,” Timberlake said. “I think that’s a big part of the success of this program.”

Timberlake, who has a fine arts degree, has followed what Lowe is doing artistically.

“Wendell has all of a sudden found this renaissance where he’s suddenly very prolific again,” Timberlake said. “It’s like it’s opened a door for him. It was pretty brave for him to put himself out there and say, ‘This is what I’m doing now.’ He’s showing his Parkinson’s to the world.”

Rock Steady was founded by former Marion County Prosecutor Scott Newman in 2006 after he was diagnosed with Parkinson’s at age 40.

What: “Artist boxer – This is my Parkinson’s”

When: Reception is from 6 to 9 p.m. April 7 as part of the First Friday Art Tour of the Indianapolis Downtown Artists and Dealers Association. The exhibit will continue through the month of April.