Sen. Joe Donnelly has taken notice of what Dr. Tim Kelly has been doing on the front lines of helping Hoosiers who are battling opioid addictions and other dangerous substances. 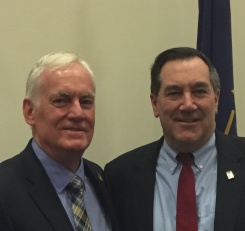 To acknowledge Kelly’s work, the Indiana senator invited Kelly, the director of addiction treatment services for Community Health Network, to be his guest for President Donald Trump’s address before a Joint Session of Congress Feb. 28 in Washington, D.C.

“It was an amazing experience and an amazing honor,” said Kelly, a Carmel resident who works out of Community Health North in Indianapolis. “Each senator gets to invite one guest to this Presidential address. Sen. Donnelly said each year that he likes to invite someone who is doing something positive back in Indiana. He’s got a special interest in the drug and opioid epidemic. He wants to improve access and treatment and other efforts to curb the addictions epidemic. He wants to impact it from several angles, but one is increasing access to treatment, increasing (addictions) workforce and making it easier to get help,”

Prior to the address, Kelly got to meet several senators such as John McCain, Chuck Schumer, Ted Cruz and Indiana’s other senator, Todd Young.

“(Donnelly) totally gets it as far as far as the seriousness of this epidemic,” Kelly said. “A lot of judges and probation people are becoming more supportive of anything they can do. If you don’t treat this, it just becomes a revolving door.”

Kelly said he has been told the property crime rate has increased greatly in areas of Hamilton County.

“These people can’t afford the heroin habit, so they do a lot of stealing from retail businesses and families,” Kelly said. “If you don’t treat the problem creating all this criminal behavior, it never gets better. People get out and keep doing the same thing. There are definitely people in Hamilton County that understand that and so does Sen. Donnelly. He’s a like a breath of fresh air. He’s real enthusiastic, real idealistic and a high integrity guy, and he wants to do the right thing. If you don’t find ways to provide help to people that have this problem. Then you are just going to pay for locking them up endlessly and going through the court system.”

Kelly has been in involved in the treatment of addictions for more than 30 years.  Donnelly has worked get the Comprehensive Addiction and Recovery Act and the 21st Century Cures Act passed and signed into law. Both have programs to combat the drug epidemic.