You are at:Home»Night & Day»Entertainment News»Oaklandon Civic to show ‘King Mackerel and The Blues are Running’

After 20 years with the same show, Kevin Friedly is switching roles. 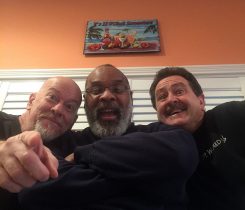 Friedly began working in community theater in the 1970s and found his role in “Pump Boys and Dinettes.” He said the cast had such a great time they revived the play every two years for 20 years at theaters around Indianapolis.

Between that and his band, Audio Diner, Friedly didn’t have much time for other shows. Now, he is directing and starring in Oaklandon Civic Theatre’s production of “King Mackerel and The Blues are Running.” The show opens at 8 p.m. March 10 at 6450 Oaklandon Rd.

The show follows the Coastal Cohorts, a group of three men who gather the people of North Carolina to raise money to repair a local inn that was damaged by a hurricane.  It’s not a typical play, though. The three men act, sing and play the instruments during the show.

“This one is so much more about the sound than the look,” Friedly said. “I kind of like that I get to be a part of all the pieces.”

Friedly wants to get the audience involved as much as possible. They will even play bingo at intermission. The winner will be invited on stage.

“The premise of this show is that we brought this audience here to raise money, so we actually can interact and do interact,” Freidly said. “I’m hoping their feet are moving and their hands are clapping.”

The show runs from March 10-19. Tickets are $12. To find the full performance schedule and purchase tickets, visit oaklandoncivictheatre.org or call 317-823-4761.

The cast is dedicating the show to the lateReid Miller, who had discussed working on the performance with Friedly while they were a part of “Pump Boys and Dinettes.”