You are at:Home»Current in Westfield»County historian David Heighway speaks to Westfield Rotary Club 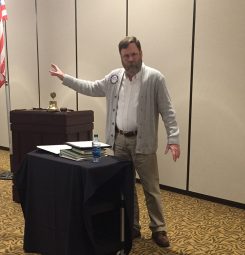 He began his presentation with talks of Douglass and a riot that occurred in Pendleton when a mob attacked Douglass, a 19th century former slave and abolitionist.

Heighway said much of his job is proving myths to be either true or false Much of his presentation focused on Douglass’s 1881 autobiography. Heighway said that while the book underwent editing, much of Micajah White’s portion was cut out. White was a Quaker from Westfield. White’s teeth were knocked out by a brick bat by the mob during Douglass’s presentation.

“The thing was, all of the White family was involved in the anti-slavery movement and the Underground Railroad,” Heighway said. “One of things we are dealing with now as historians is talk about the Underground Railroad and abolition. (Was)  it was illegal? So a lot of people didn’t talk about it. With a lot of West Quakers, it’s myth, but at the same time all sorts of arrows are saying this is probably true but we can’t find paperwork.”

When the central Indiana mob attacked Douglass, his hand was broken, which gave him problems for the rest of his life because it was never set properly.

Some Rotarians asked Heighway how Douglass got so famous. Heighway’s answer was that Douglass was an eloquent speaker.

“He was a naturally good speaker,” he said. “A lot of guys escaped from slavery, but Douglass educated himself and learned how to talk about what his life was like. He was very intelligent. A lot of ex-slaves talked on abolition tours, but few could express themselves as well as Douglass could, so as a result he definitely attracted a lot of attention his way.”