You are at:Home»Current in Zionsville»Zionsville teen to race in IndyCar series 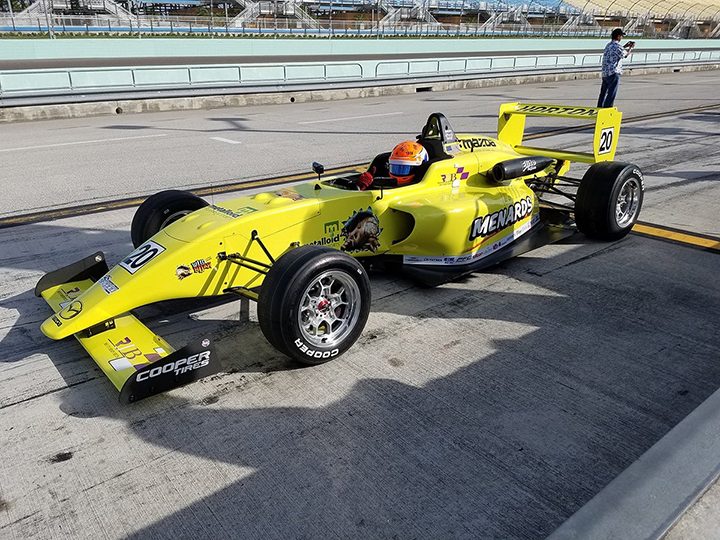 Chandler Horton will compete in his first USF2000 race March 11 and 12. (Submitted photo)

Chandler Horton is pretty good at juggling. The 19-year-old from Zionsville is a freshman at Marian University, a member of the school’s cycling team and about to drive in his first race in the USF2000 series, a support series to IndyCar, in St. Petersburg, Fla., March 11 and 12.

“It takes a lot of scheduling, and I just force myself to stick to it,” Horton said. “Cycling and racing schedules and training are pre-determined, so during the week it’s all about looking ahead and knowing what homework I have coming up. I have no free time. I am either doing homework or riding my bike or going to the track.”

RJB Motorsports announced last December that Horton would be driving for the team after testing with it in the fall. The teen grew up in the racing world – his father, Jeff, is the IndyCar director of engineering, and the family often traveled to races in their motor home, staying in the driver lot.

“My dad’s worked in professional racing for 30 years now. Since I was a couple months old I have been going to IndyCar races,” Horton said. “I took my first steps at an IndyCar race.”

The family even lived at the Indianapolis Motor Speedway when it first moved to the state when Horton was 4 years old while shopping for a home. Once they settled in Zionsville, he raced dirt bikes from ages 5 to 12. When he turned 13, he transitioned into go-kart racing, and when he was 17, he started racing Formula Fords. Behind the wheel, Horton said he is calm but can be aggressive when needed.

“(It’s) just a lot of controlled excitement and a lot of focus on the task at hand, because if I start worrying about other things, I won’t drive well,” he said. “You have to know what you need to do, whether it is a practice or test session or going out to qualify. At the start (line) you run through in your head how you want it to go and how it should go, and when that green flag drops, it’s go-time.”

Horton’s pre-race ritual is always the same – putting his clothes on the same way.

“I put one side on before the other and I always get in the car from the same side, and the person who does my belt has to do it from a certain side,” he said.

His goal is to make his Indianapolis 500 debut in five years, and in 10 years have a solid IndyCar career driving for Team Penske.

For now, Horton is concentrating on the 14 races over the course of eight weekends in his inaugural season with RJB Motorsports.

“I would say my motto can be summed up with what Steve McQueen said, ‘Racing is life. Anything that happens before or after is just waiting,’” he said.