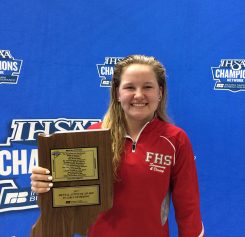 “I had absolutely no idea — not a clue in the world,” Parrish said.  “I was making bets with my friends that my best friend (Crown Point’s) Hannah Kukurugya was going to get it because she is one of the most amazing seniors in the state.”

Parrish received the award Feb. 11 following the state swimming finals at the IU Natatorium at IUPUI. Parrish finished third in both the 100-yard freestyle and 200 freestyle. Fishers placed third as a team.

“It couldn’t be a better finish not only for me but for Fishers High School,” said Parrish, who will swim for University of Kansas next season. “We never got higher than fourth in a relay, and we got third in our 200 free. I was in tears after it. This has been the best ending of a season that I could ever dream of.”

Parrish has watched as the program grown.

“I came in with a lot of talent and we some amazing seniors that instilled leadership in me,” Parrish said. “They showed me we could something special at Fishers High School if we put in a lot of work and dedication.”

Parrish is a member of the National Honor Society, Student Athletic Council and Fellowship of Christian Athletes.

She volunteers at the O’Malley Foundation where she teaches autistic young adults to swim for exercise.

Parrish, who has a 3.4 GPA, plans to major in business at Kansas.

The IHSAA executive committee annually gives the award to a senior nominated by her principal and coach, who was determined to have best demonstrated mental attitude, scholarship, leadership and athletic ability.